The Paul Guest Prize is an award and exhibition held biennially that highlights contemporary drawing practice in Australia. The Prize was initiated by former Family Court Judge and Olympic rower, The Honourable Paul Guest OAM QC and encourages artists from across Australia to engage with the important medium of drawing in contemporary art practice.  The Prize is a non-acquisitive cash award of $15,000.

‘My abiding and passionate interest in art commenced several decades ago and from those early beginnings I was introduced to contemporary art in a holistic way which ran parallel to my professional career. I appreciate that the journey for artists is, at times, a demanding and tortuous one and I trust that in some small way I have and will continue to assist them to achieve their full potential,’ said the Honourable Paul M Guest, OAM QC.

In 2022 we are pleased to announce leading Australian artist Gareth Sansom as the judge.

On drawing as a medium

As administrators of the Prize, Paul Guest and Bendigo Art Gallery have not stipulated what constitutes a drawing in the terms and conditions and hope to see a range of approaches and interpretations of this medium in the prize.

This year’s Paul Guest Prize exhibition takes an expansive view of drawing, with embroidered textiles and text-based works on display alongside those that use the less conventional mediums of sediment or clay and digital technology. The mood is equally wide ranging: Rosslynd Piggott’s Cluster Garden/Fracture and David Sequeira’s Song Cycle tap into a quieter, melodic or poetic sensibility while James Guert’s Trajectories V: Carbon Marks is set at a higher pitch, a cerebral drawing that yet seems to vibrate with the discordant screech of the scanner used to abstract the original image. There are works of wit and irony, of levity and bravery, and many that reveal exceptional skill.

The winning drawing, Richard Lewer’s 2020, is a reflective work that speaks of our shared condition and serves both as a snapshot and a summary of the year’s redirection. At the same time, it invites us to think about what is hidden or yet to come in the aftermath of the pandemic. The masked figures are silenced, motionless and yet simmering with a palpable anxiety that is intensified by the field of thousands of lines that give the picture its dissident energy. This is a powerful drawing loaded with portent and very much of its times; part observation and large part pithy and incisive social commentary.

It has been a very tough year for the Bendigo Art Gallery arising from the situation imposed by the Covid-19 restrictions. With this said, I would firstly like to extend my sincere and over-all gratitude to the Gallery for all that it has done though such testing times in facilitating this Drawing Prize. In particular I extend to the Director, Jessica Bridgfoot, and the Curator, Emma Busowsky Cox, my appreciation for their continued support and vision despite the difficulties brought about by the Pandemic.

The task that confronted Lesley Harding, the Judge of this year’s prize, was indeed a daunting one, both in the selection of the finalists and the overall winner. My respect for her professional excellence and expertise in selecting the finalists and the winner of the Drawing Prize is without limit. In my view, we were very fortunate indeed in having her undertake such an onerous burden in such testing times.

I extend to the winner, Richard Lewer, my heartiest congratulations. I am personally aware of his outstanding reputation and, if I may be bold enough to say, his drawing is remarkable, topical and pre-eminent. I have had the undoubted advantage of personally viewing the exhibition at the Gallery and can say with absolute candor that its selection has emerged from a prestigious and stellar field of finalists. I extend to Richard my heartiest congratulations and wish him all the best for the future.

Drawing is the foundation of my art practice, I appreciate that it is immediate, unpretentious and uncomplicated. From a personal point of view, drawing plays a fundamental role in my wellbeing, it is where I go to escape when I need to deal with my demons, it is the best way I know to become healthy.

2020 has been a year none of us will forget. This drawing was made as a response to the Black Summer bushfires. There were so many horrific images in the media depicting the personal, community and environmental losses you couldn’t help but be impacted by the enormity even safely far away in the city. I felt the need to visit some of these communities in East Gippsland, Victoria in the aftermath of the fires to grasp the sobering reality of confronting disaster and loss. This drawing depicts people in an urban setting wearing face masks, cities beset by smoke pollution and ash, soon to be plagued by the outbreak of COVID-19.

This is an enigmatic work – simply pencil on paper. At a distance you see two eyes and a nose in a gigantic face that dominates the image. But as you get closer a Pacific Island scene appears. A man with net, huts, palm trees and mountains.  The face disappears altogether – it is not overlaid on the drawing at all but it is formed by the blank unworked areas.  It is not there, but always there.
Roger Butler, National Gallery of Australia 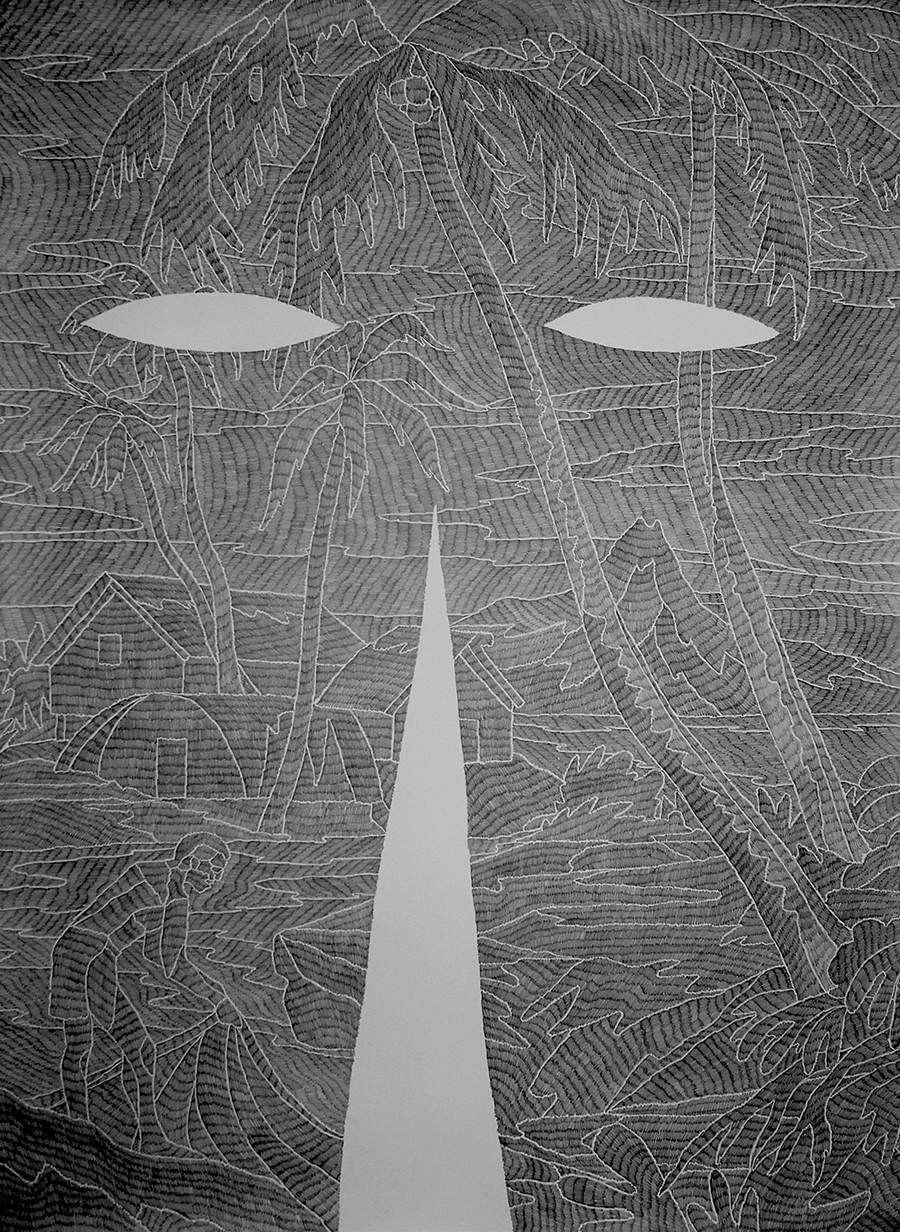 ‘From a most impressive and varied field of exquisite drawings by artists of accomplishment both young and older, the Paul Guest Drawing Prize for 2016 is being awarded to Peter Grziwotz for the work Study as St Jerome for a self-portrait.
This work manifests a high level of visual acuity but more significantly it is a work where the technique does not interfere with empathy for the subject. The drawing is intense with poignant, compassionate and enigmatic feeling.’
Godwin Bradbeer

Artwork:
Peter Grziwotz
Study as St Jerome for a self-portrait 2016
charcoal on paper
Image courtesy of the artist 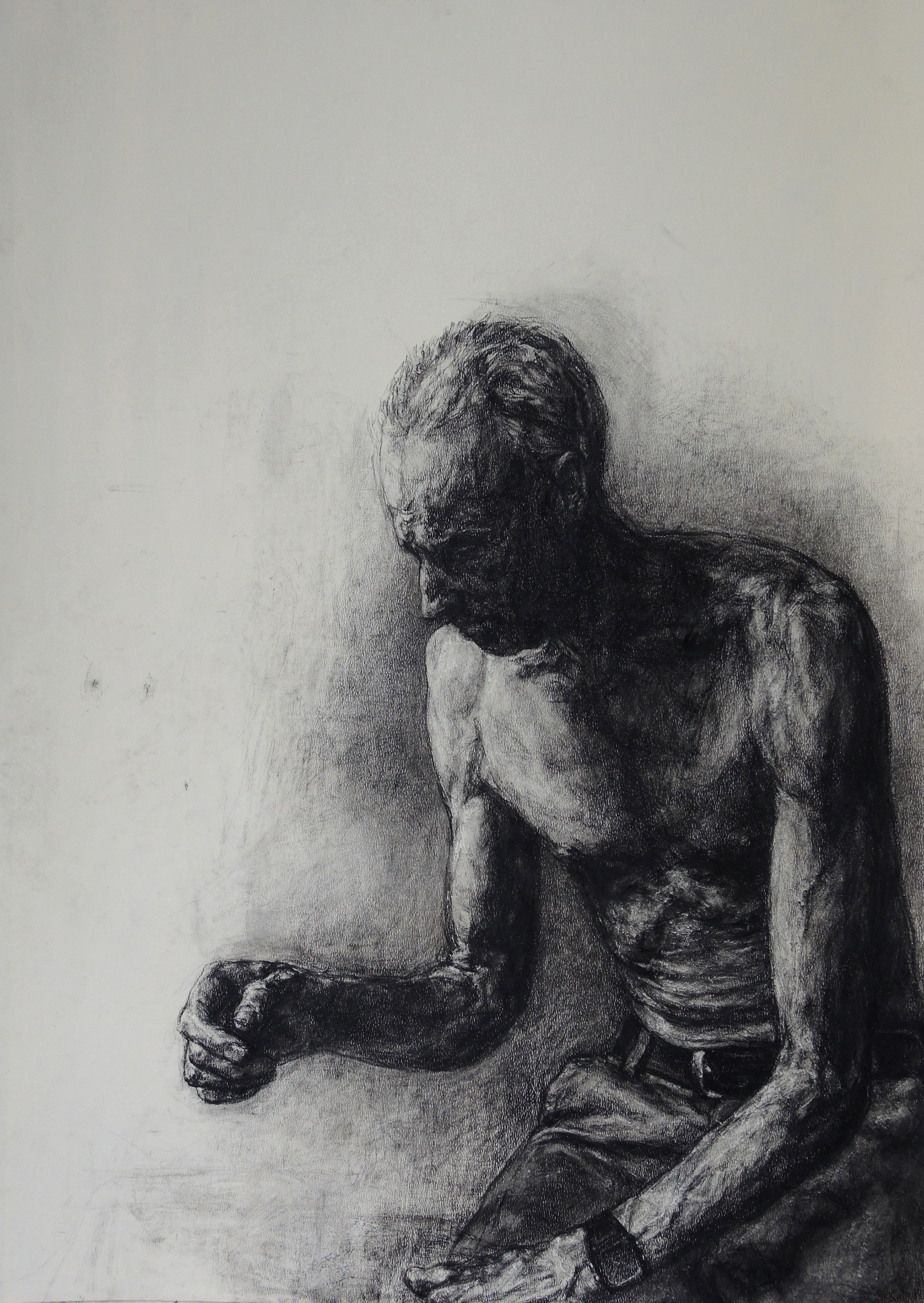 Paul Guest Drawing Prize 2014 winner: Heather B Swann for her artwork You are a Balloon 2014.

Heather B Swann’s You are a balloon is a powerful and intriguing drawing executed in the artist’s unique visual language. The work skilfully holds figuration and abstraction in careful balance; creating an almost palpable tension. Seemingly simple in execution, the drawing displays a real facility and assurance of line. On closer inspection the work’s witty juxtaposition of text and image reveals something much darker; creating both a space and mood that continues to sustain the viewer, encouraging one to return to the work time and again.
Kelly Gellatly

Artwork:
Heather Swann
You are a balloon 2014
ink and wash on paper
Courtesy of the artist and Karen Woodbury Gallery, Melbourne

Heather B Swann You are a Balloon 2014, ink and wash on paper. Courtesy of the artist and Karen Woodbury Gallery, Melbourne. 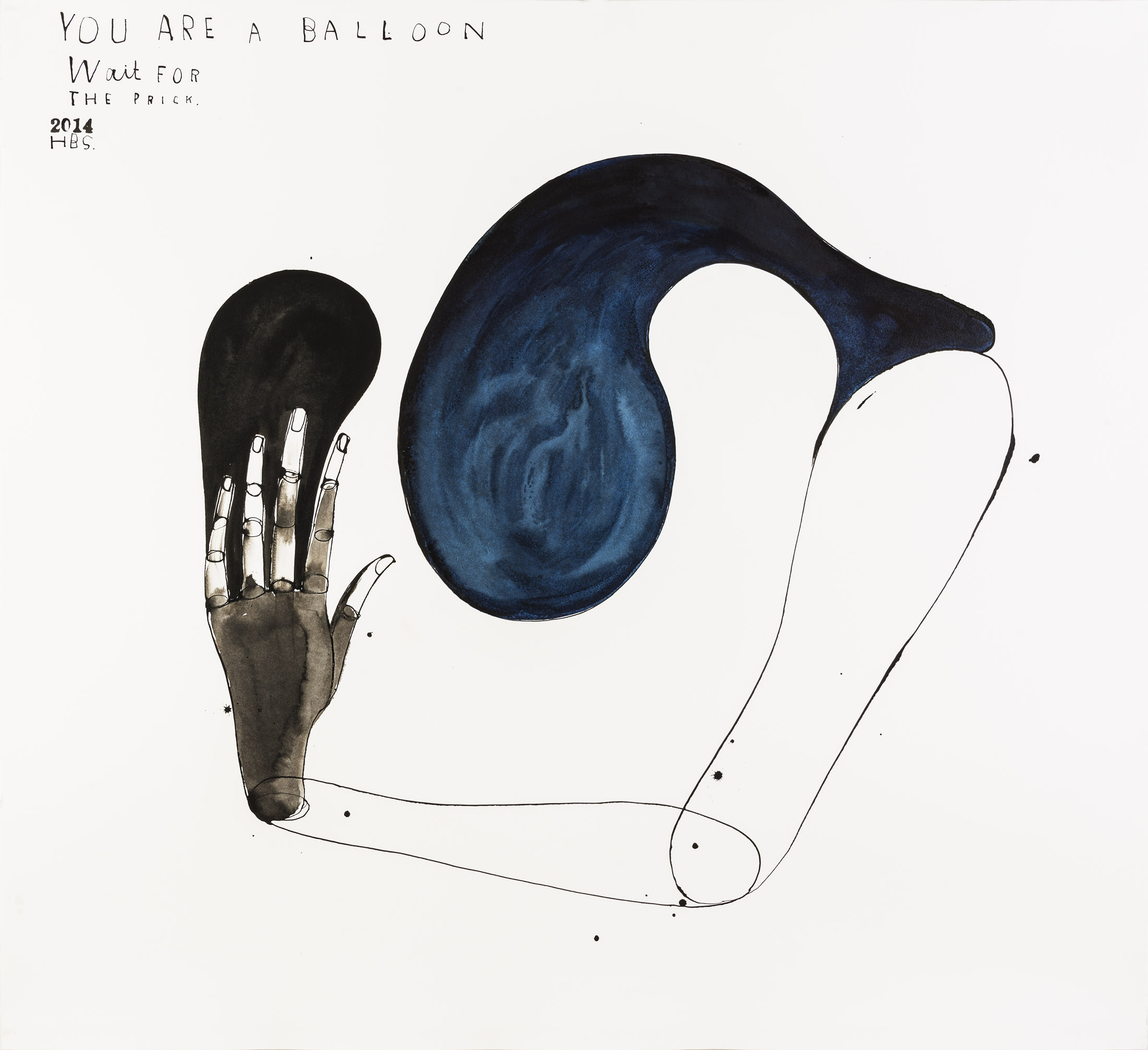 The enigmatic and powerful work Drawings and correspondence 4 from Tom Nicholson has won the Paul Guest Drawing Prize. Chosen out of a field of 45 artists drawn from over 310 admissions.
Judge Cathy Leahy, Senior Curator Prints & Drawings National Gallery of Victoria said of the work:
“Tom Nicholson’s drawing has great graphic power that speaks immediately to the viewer while referencing the complexities of the relationships between the European settler and indigenous communities in the 19th century. The ghostly white figures that dance across the deep black ground are based upon late 19th century photographs of a decorated mia-mia in an aboriginal encampment that was constructed as a didactic display in the Royal Melbourne Zoo.”

Artwork:
Tom Nicholson
Drawings and correspondence 4 2011
charcoal and white pastel on paper
Courtesy of the artist and Anna Schwartz Gallery 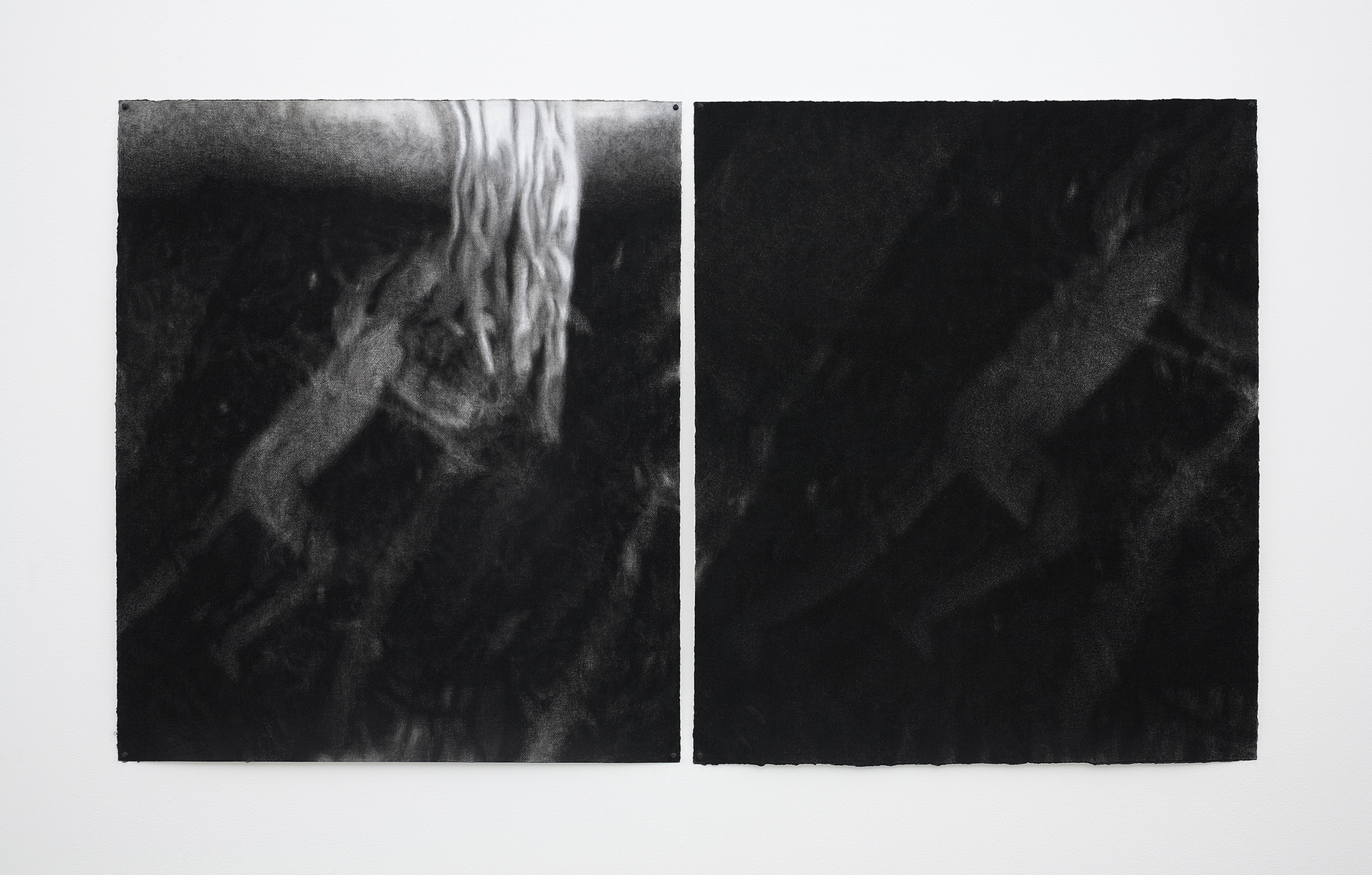 Victorian artist Belinda Fox has been chosen as the winner of the inaugural Paul Guest Drawing Prize. A graduate of the Victorian College of the Arts as a printmaker, the hand drawn watercolour work is extraordinary for its textural qualities.
Judge Roger Butler said, ‘The work doesn’t reveal itself as soon as you see it; rather, it invites you to interpret it through its complexity. I’m intrigued by the use of the ink blot suggesting a duality in the work – we see an army tank on one side, while on the other the tank’s form has morphed into something seemingly more sinister. In her work Fox gives the viewer suggestions or ideas but ultimately it is up to the viewer to complete the image’.
Choosing a winning work was difficult. Roger added, ‘I was genuinely taken aback and impressed by the extraordinarily high calibre of works represented in the exhibition. The final selection of artists and works for the exhibition and prize is of an extremely high quality, nearly without exception. Selecting the winner was incredibly difficult, far more than I could have anticipated, and as such an honour to be a part of.’
Thirty-seven artists and thirty-six works were shortlisted for the inaugural Paul Guest Drawing Prize and exhibition at Bendigo Art Gallery.
Judge Roger Butler, Senior Curator, Australian Prints and Drawings National Gallery of Australia Canberra commented: ’It was refreshing to see work from such a broad spectrum of artists – from youthful to mature – both working in traditional modes and reinterpreting the very definitions of drawings. The prize has undoubtedly encouraged artists to extend and explore the possibilities of the medium.’ 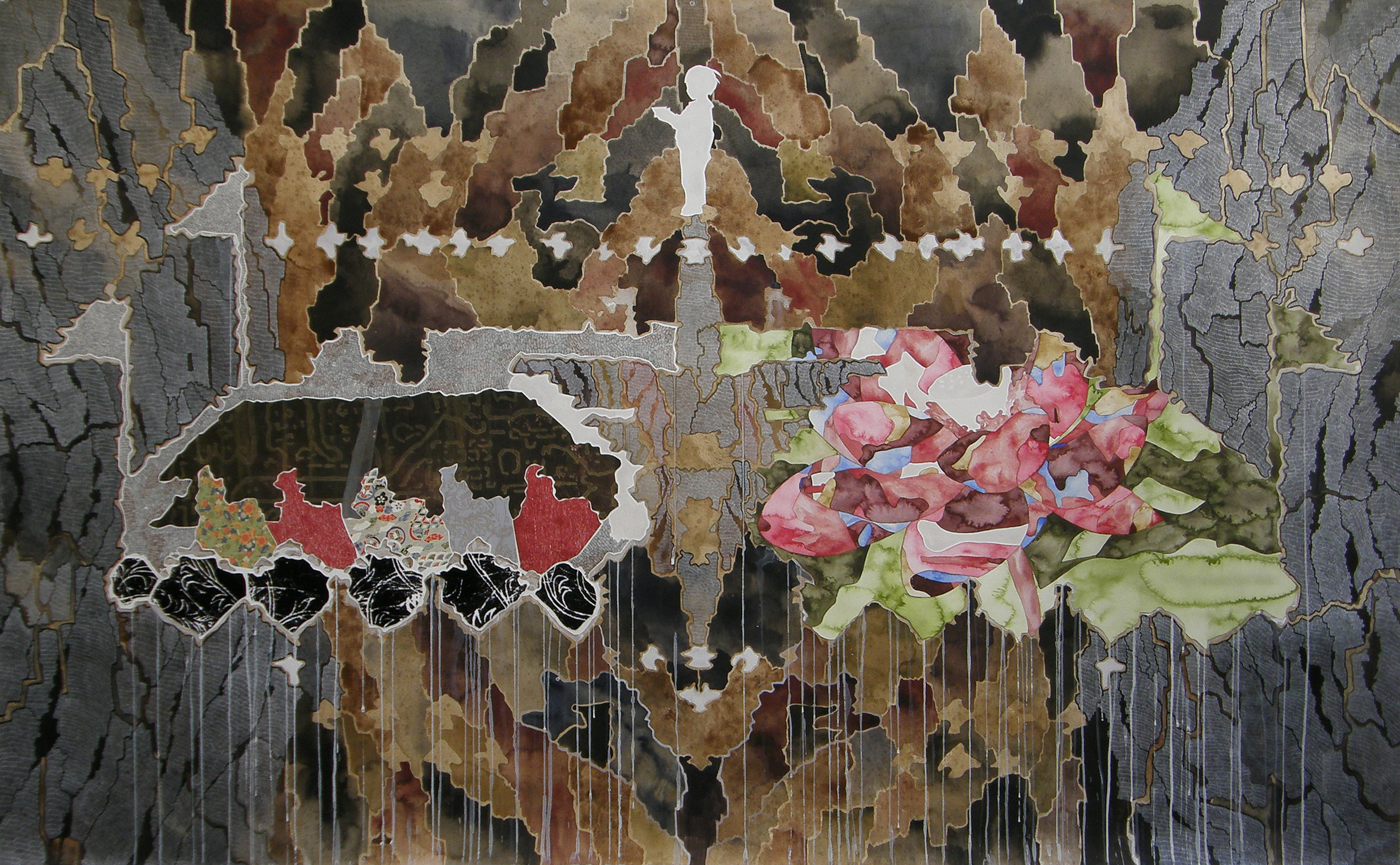