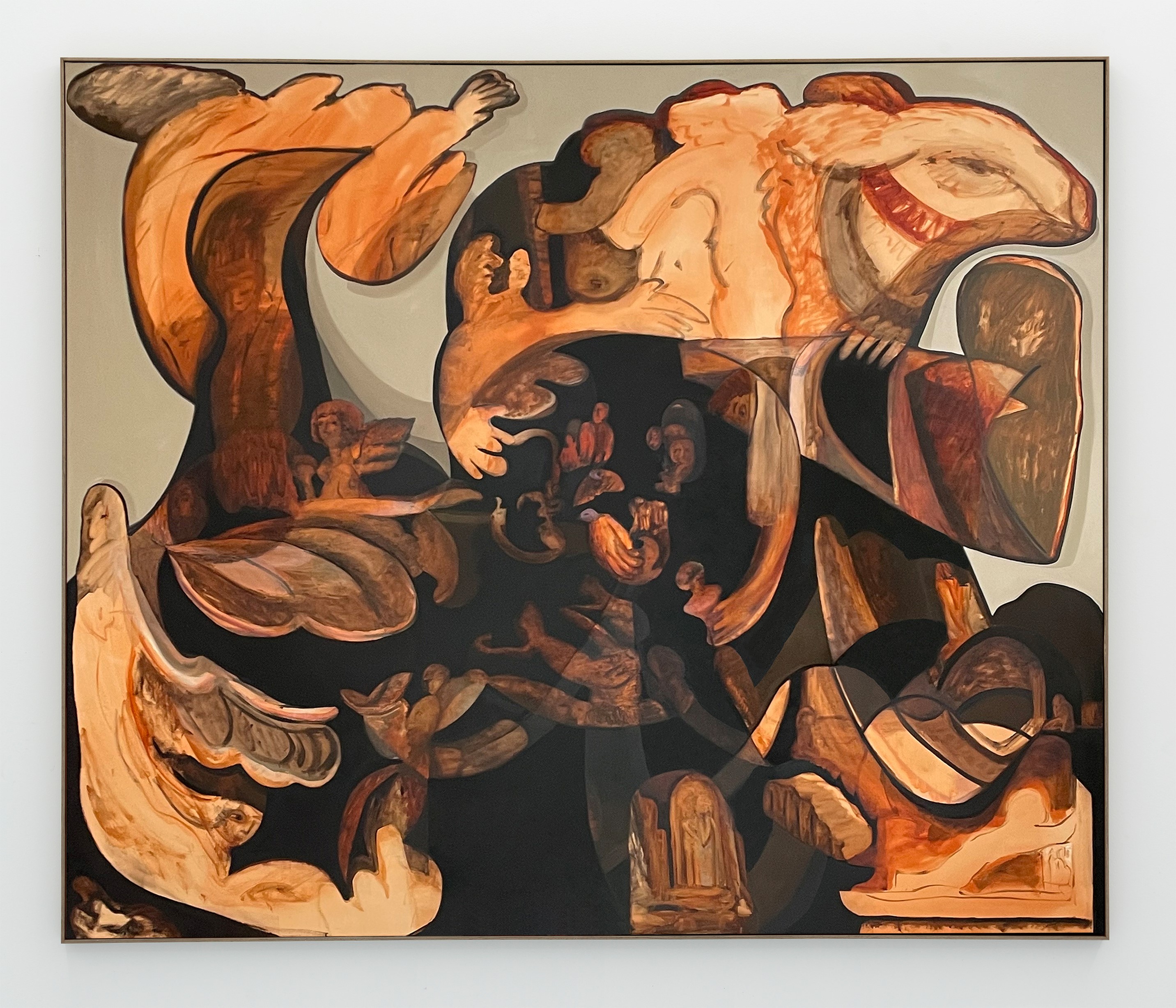 Kirsty Budge
'Ok, so is this a fresh hell or are we just adding to the regular one today?'  2021
oil on canvas
Courtesy the artist and Daine Singer, Melbourne

Held every two years, the Arthur Guy Memorial Painting Prize attracts some of Australia’s most accomplished artists, awarding a generous acquisitive cash prize of $50,000. The Prize provides Bendigo Art Gallery with the opportunity to survey contemporary painting by established and emerging artists from across Australia.

Works from the shortlisted artists are on display during the Arthur Guy Memorial Painting Prize exhibition from 20 November 2021 – 13 February 2022.

The Prize was initiated by Mr Allen Guy CBE (1917-2007) to honour his brother Arthur Guy (1914-1945) whose life was tragically cut short whilst in service in New Guinea. Inaugurated in 2003, Bendigo Art Gallery acknowledges all those who have contributed to the success of the award and look forward to the continuation of this prestigious and highly regarded acquisitive prize.

See below for Winners, artworks and finalists .

About Arthur Guy
Arthur Guy was born in Melbourne on 24 November 1914, the first son for Arthur and Catherine Guy. He was the older brother of Allen Rupert Guy. Arthur was educated at Camp Hill State School in Bendigo and then at Ballarat Grammar School. He enlisted in the Royal Australian Air Force in a signals unit and served in New Guinea. On 14 February 1945, aged 30, he was on a biscuit bomber mission delivering supplies to troops when his plane came down near Wewak. He is buried in the Lae War Memorial Cemetery.

'Ok, so is this a fresh hell or are we just adding to the regular one today?'

Painted during the 2021 Melbourne lockdowns, Budge says the work reflects her personal experiences during this difficult period. 'This painting has its own logic and it was a way to cope, to practice acceptance and to surrender what was happening around me. It also felt like a form of communication because I have found it really hard to talk during this time. We were all in this inky abyss and trying to stay afloat. My closest people know that if I'm painting then I'm doing ok,’ she says.

‘The judging panel had a shared excitement about Kirsty Budge’s winning work. It is a magical ecology of forms at play in an energetic and elegant composition with so much to discover. Through a confident application of colour, line and tone, recognisable symbols and motifs slip in and out of our recognition. Kirsty shows a wonderful painterly capacity to push and pull space. You sense a real enjoyment in the process of making. This is clearly a painting in dialogue with history, while also resonating with our current times, bringing forth its own sense of landscape and narrative.

Artwork
Kirsty Budge
Australia 2021
'Ok, so is this a fresh hell or are we just adding to the regular one today?'
oil on canvas
Courtesy the artist and Daine Singer, Melbourne 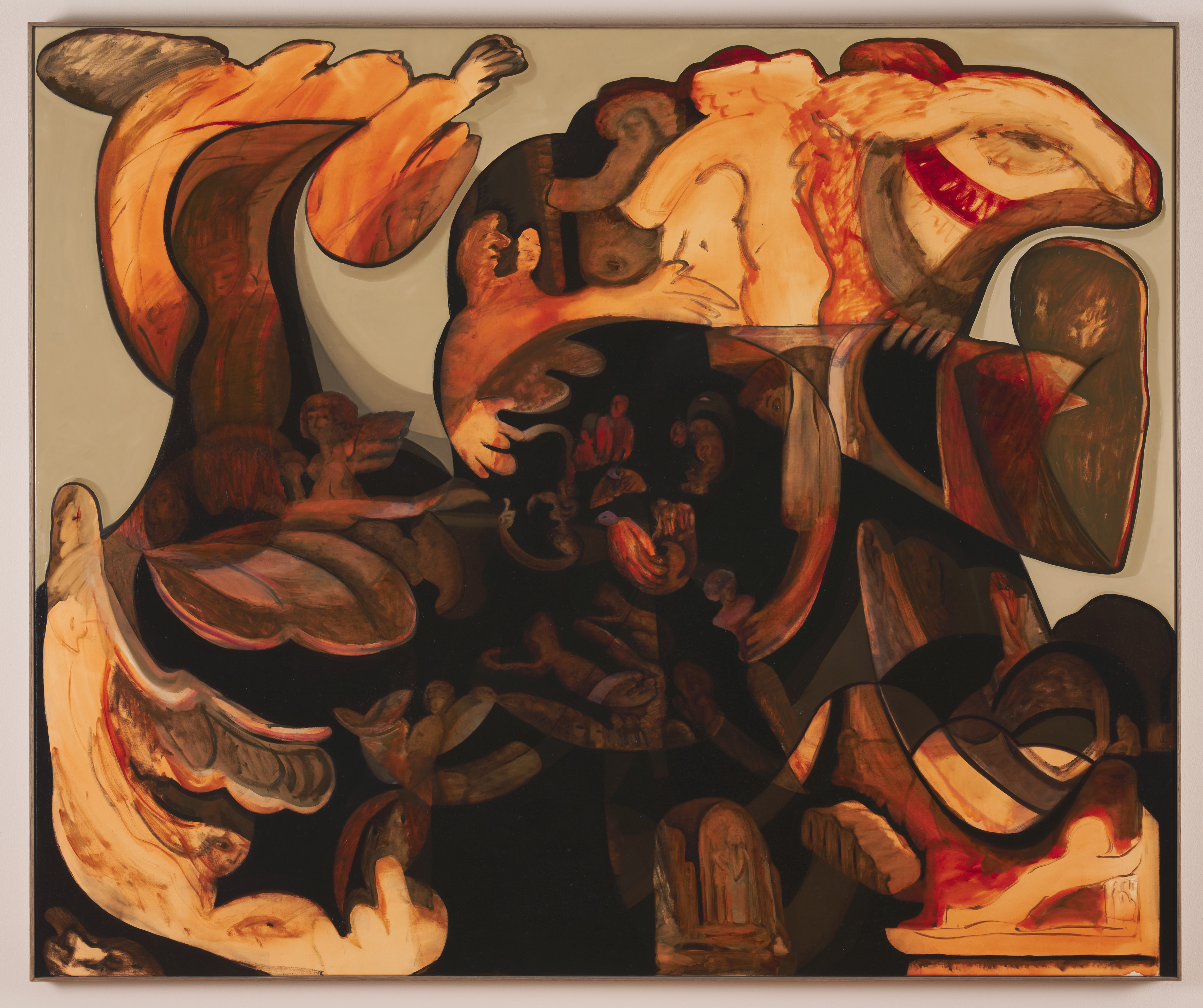 messmates 1 is part of a body of work comprising 11 overlapping panels, presented for exhibition in Melbourne earlier this year. The artist explores notions of waste, renewal and regeneration as she incorporates old clothes and other collected detritus into the work and overpaints i in bright and earthy tones.

“Pasco-White’s visceral work pushes the limits of the medium itself; it’s raw, layered and vibrant with an incredible surface texture and palette. It is emblematic of the artist’s life and current practice, reflecting the complexity of contemporary life as a female artist.
“We are thrilled to award this prize to an early career artist, and recognise that this could prove to be a pivotal moment in her practice. We can’t wait to see what she does next.” 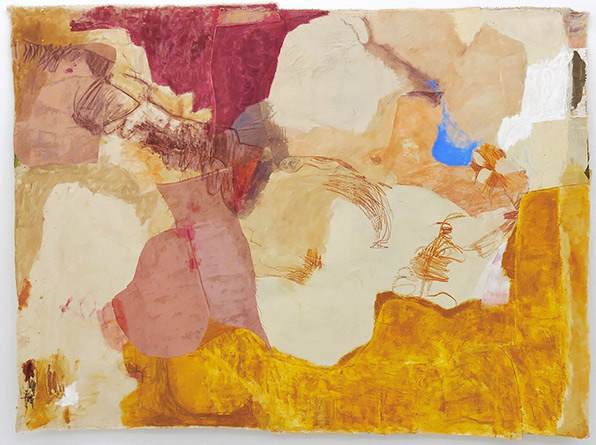 Central Australian artist Margaret Loy Pula has won the 2017 Arthur Guy Memorial Painting Prize for her 2016 work Anatye (bush potato) 2016.
Judges who included Mark Feary, Artistic Director Gertrude Street Gallery, Dr David Hansen, Associate Professor, Centre for Art History and Art Theory, ANU School of Art and Design, Hannah Matthews, Senior Curator, Monash University Museum of Art and representatives from Bendigo Art Gallery and the Guy family, were in unanimous agreement in their decision to select Margaret Loy Pula as the recipient of the prize, and commended the vivid impact of the painting, in spite of its reductionist palette.
Judges also noted that, with its demonstrable connection to country, the quietly mesmerising work could also be interpreted through the Western tradition of minimalist abstraction.
Anatye was narrowed down from an entry pool of 291 paintings and 37 finalists, which demonstrates the ongoing dynamism and resonance of the media of painting.
Anatye (bush potato) is part of an ongoing series where the artist paints stories from her father's dreaming, in particular bush potatoes, an important food source of the Anmatyerre people of Central Australia. 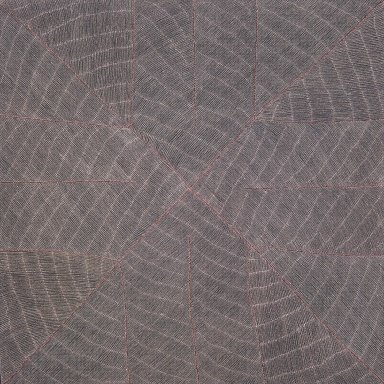 The Arthur Guy Memorial Painting Prize 2015 was awarded to Guan Wei. The judges described his work Beach 5 as having 'a strong cultural message. It is a painting about Australia and the idea of cultural transformation by a Chinese born Australian artist that speaks to us about the changing nature of Australian life'.

Since 2008 Guan set up a studio in Beijing after living in Australia for 20 years and started a new life as a travelling artist working and living in both China and Australia. Every  time he returned to his Sydney home he was always aware of the blue sky, blue sea, golden beaches,  the green bush and relaxed life style. His painting  uses references from the old Chinese maps, the three red seals are the names for imagined mountains. The emu symbolizes Australia. The fan symbolizes China. In this painting the bright sunshine, floating clouds, transparent seawater, the enchantment of the beach, all combine together to reveal a picture of nature and harmony, lightness and joy of Australia life style. 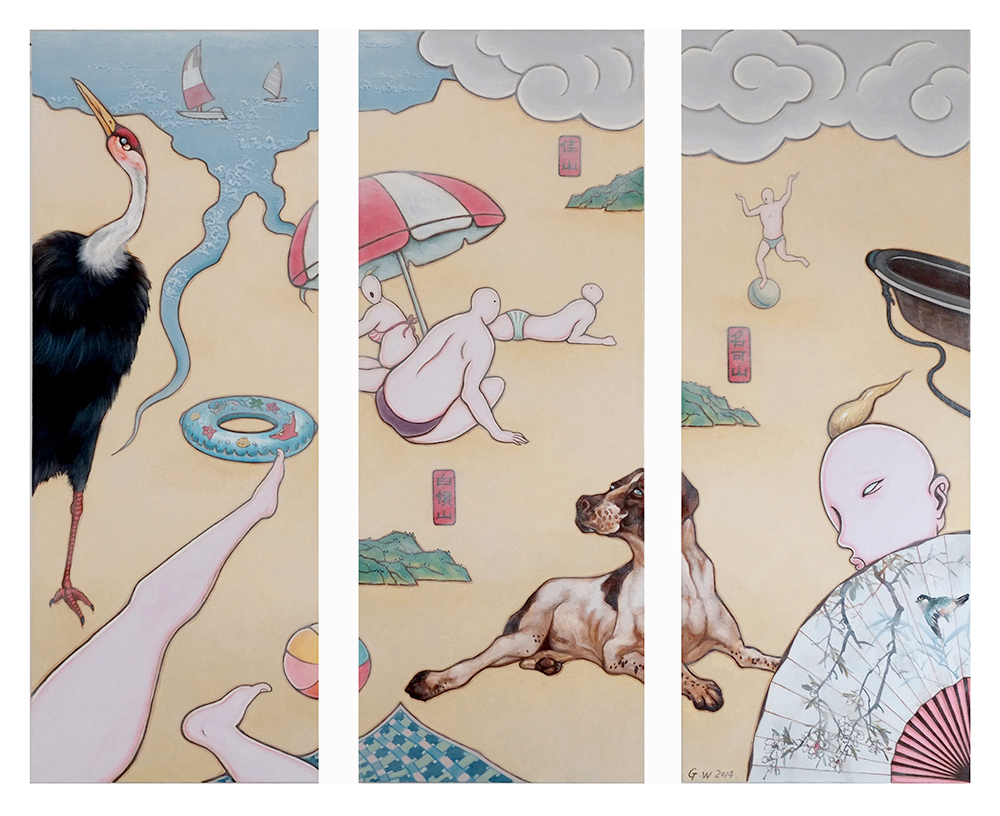 The Arthur Guy Memorial Painting Prize 2013 was awarded to Melbourne artist Chris Bond for his work Viridian.
Chris Bond’s painting is an illusion and a finely crafted canvas, constructed to look like a book. Bond expands on the historical tradition of realist painting and creates the illusion of a three-dimensional object. It is a painting expressed through the form of a book. Empty and wordless, the work can also convey a sense of loss that we will never understand. This paradox is part of the work’s beguiling beauty.
Constructed from linen, canvas and cardboard, the surface of this painted book carries exaggerated damage from its imagined use as actual objects – marks, creases, tears and stains disrupt the carefully painted surfaces. Yet the visible edges of the internal pages, constructed of layers of canvas, are crisp and clean.
Bond's interest in Formalism “… stretch[es] back to art school days in the 1990s … [my] works attempt to reduce the possibility of ‘reading’ – by removing context through the erasure of text, flattening the image by blurring and avoiding texture, and finally reducing the imagery to a single colour.
The hardback book is a beautifully redundant form. Historically its authority was held in its bulk, its expense, its inability to be broken. The dust jacket, by contrast, is lightweight, flimsy, easily damaged – a throw away. My painted books amplify this distinction, to the extent where the covers seem incongruous, misfit.” 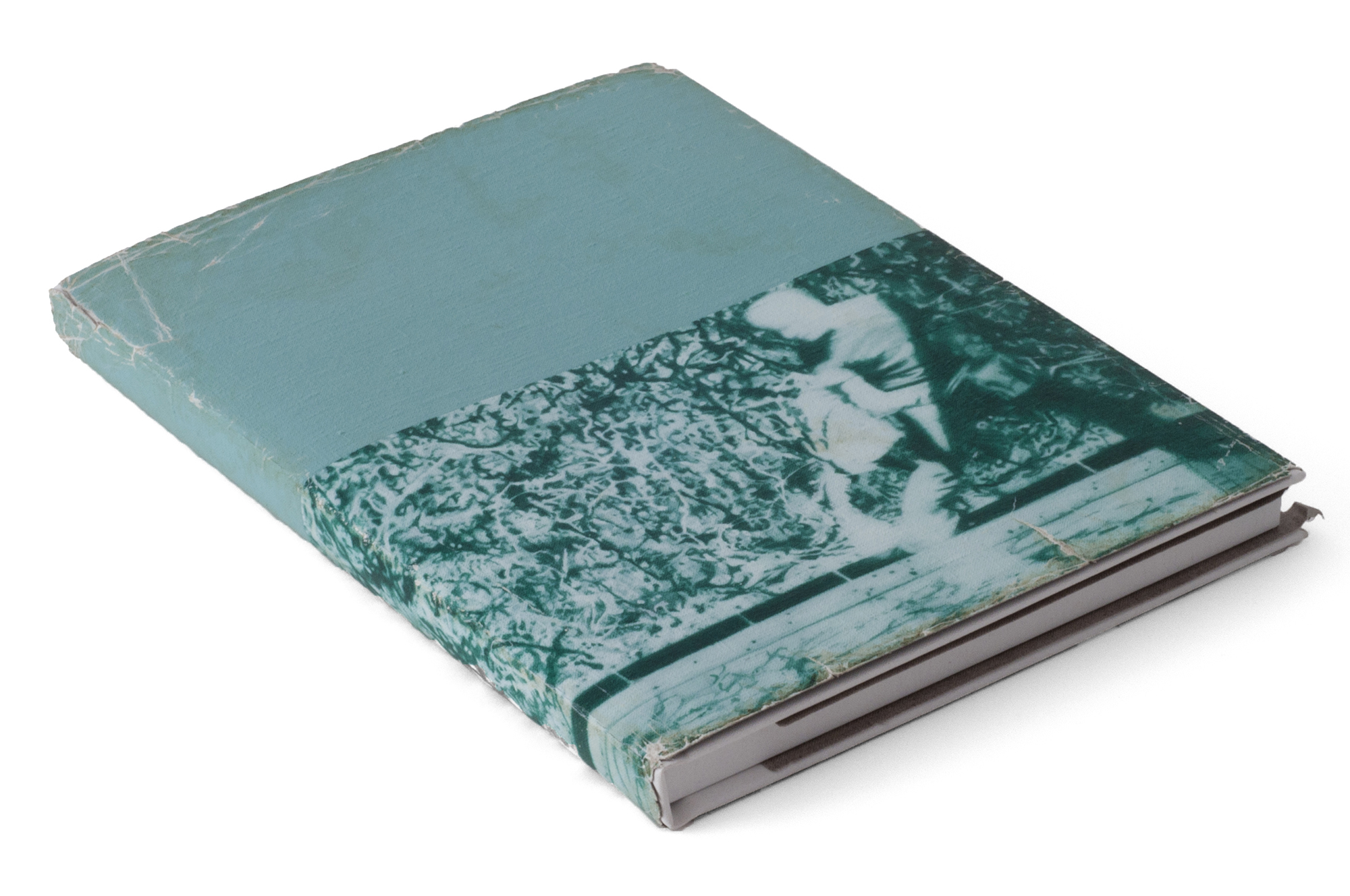 Sydney-based artist Tim Johnson was awarded the 2011 prize. The judges commented, “As one of Australia’s most highly regarded senior artists, Tim Johnson’s painting Community base unifies various disparate elements through multiple themes and narratives. Exemplary of his overall practice the work references the notion of ‘Painting’ and creates a fresh sense of what painting can do. It is a complex work that rewards on close viewing and will warrant repeat visits.”

Tim Johnson is a key contemporary painter in Australian postmodern art. Influenced by Asian art and Western Desert painting, his interests spread wider than Australia and include the art of the Buddhist East and Native America. He saw similarities between the art of cultural forms and Aboriginal art, which inspired magnificent multi-layered canvases simultaneously rich with chunks of life, events, moments and places.

Since 1980 Johnson has actively collaborated with many Indigenous artists including Clifford Possum Tjapaltjarri as well as senior Asian artists, creating breathtaking amalgams of various cultures that have been influential and at times controversial.

Artwork
Tim Johnson
Community Base 2010
acrylic on linen
Courtesy of the artist and Tolarno Galleries, Melbourne 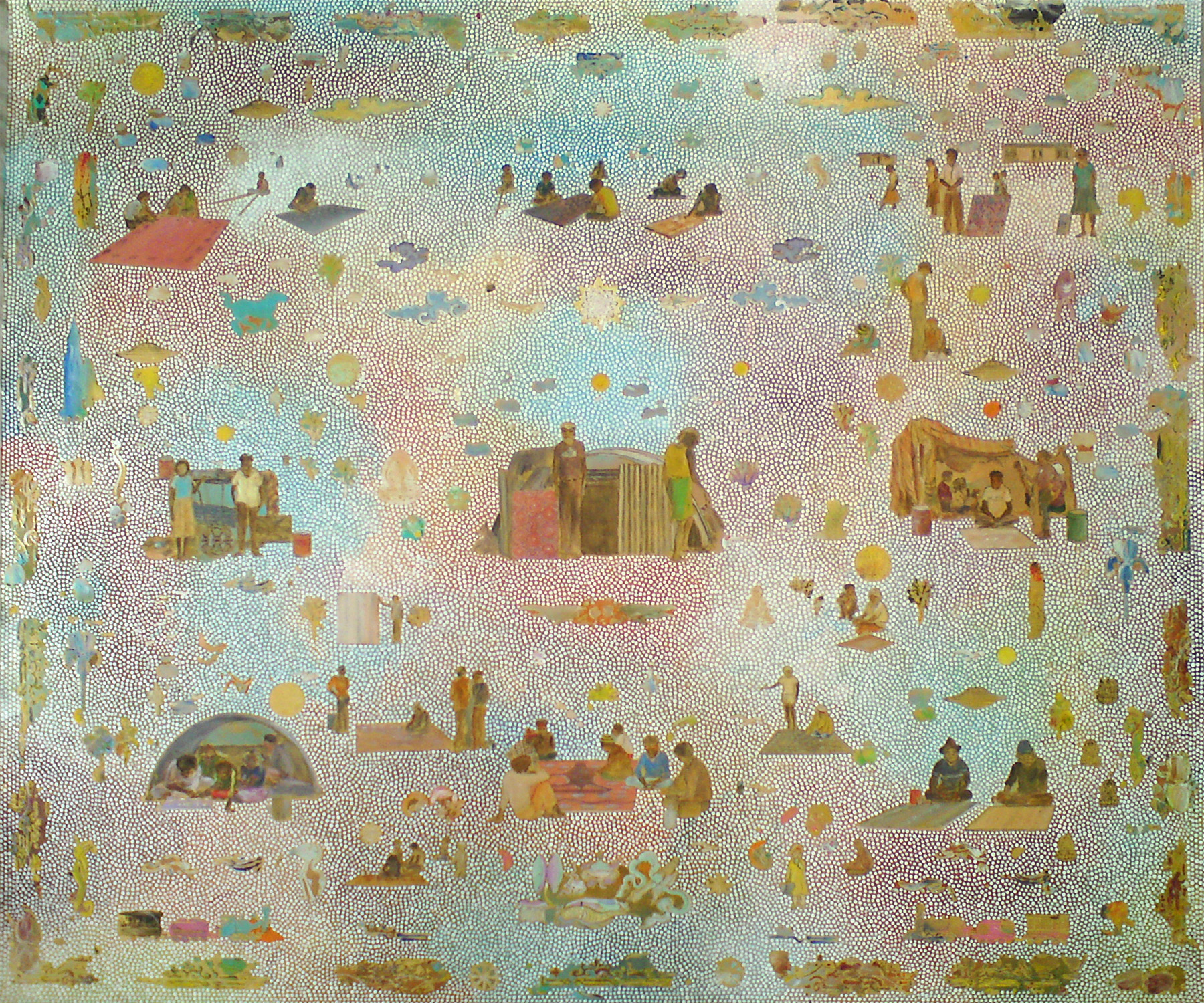 The 2009 Prize was awarded to Melbourne based artist Jan Nelson. The outstanding photo-realist painting Walking in the Tall Grass (Tom) shows, with remarkable technical virtuosity, what is possible at the juncture of painting and photography.
Although a painting, the stunning work hints at the obsession with youth and image in modern culture.
The judges commented, “Walking in Tall Grass (Tom) is a luminous painting that packs a punch despite its small size. It is an accomplished synthesis of style and subject, characterised by a conscious appropriation of contradictory styles that we recognise as decidedly contemporary. Its heightened colour, amazing detail and the scene in the mirrored sunglasses draw us into the world of the character Nelson depicts.” 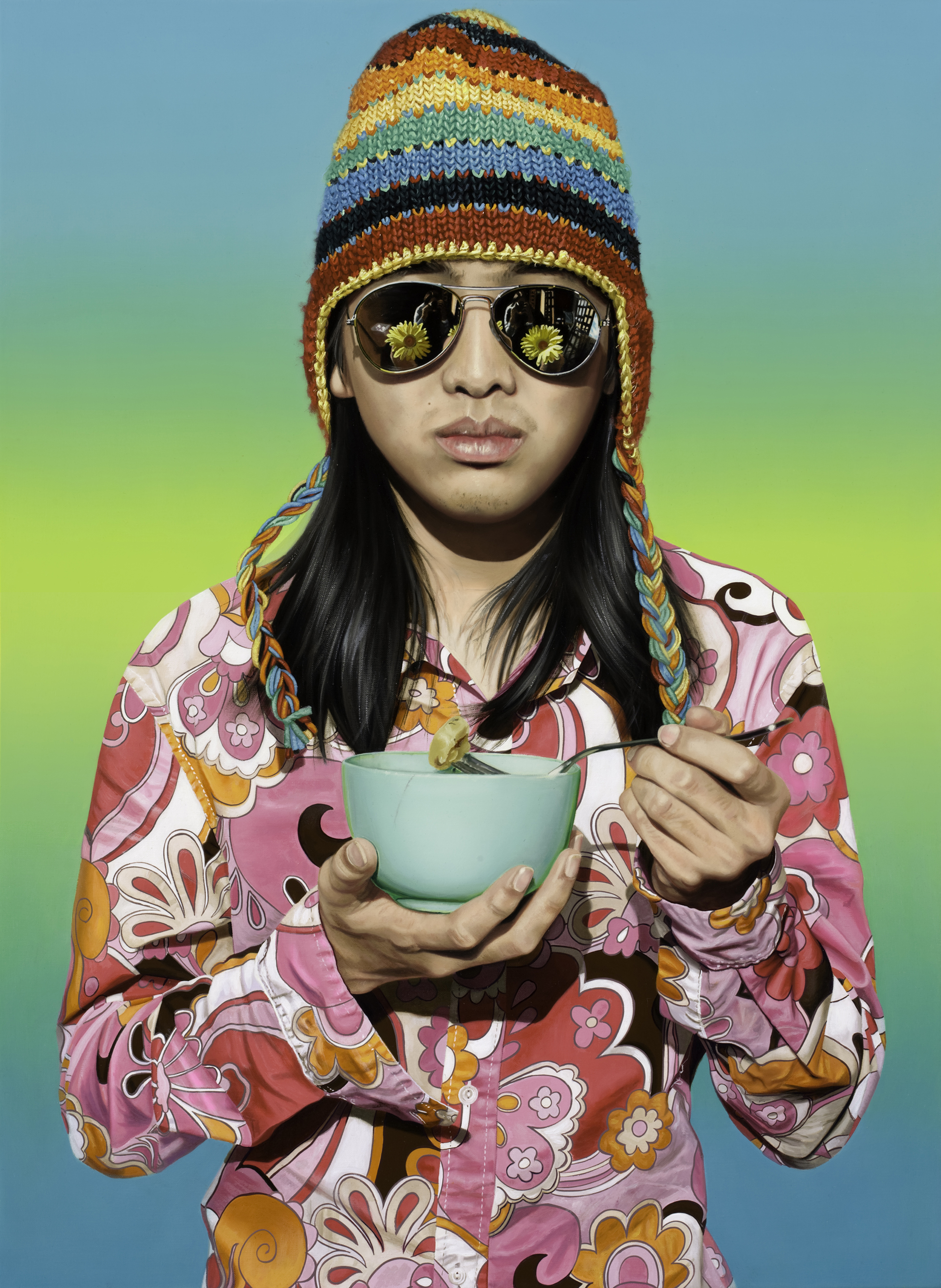 The 2007 prize was awarded to Stephen Bush for his monumental work Jerks as a passable frown. The work was selected by the panel of judges from more than 340 entrants (42 short-listed paintings).
Based in Melbourne, Stephen Bush has been a practising artist for almost 30 years. Since graduating from the Royal Melbourne Institute of Technology in 1978, Bush has exhibited extensively across Australia and the United States.
Bush’s painting is extensive and varied, he engages with a diverse range of subjects from the real to the sublime. His latest series of works, depicts majestic natural landscapes made surreal by his use of lurid pinks and greens. Into these landscapes Bush inserts emblems of human occupation – a potbelly stove, a small building – seemingly at odds with the surrounding landscape. We have a sense of an environment of seemingly contradictory elements – the beauty and untamed aspects of nature juxtaposed with humanity’s attempts at control and cultivation. 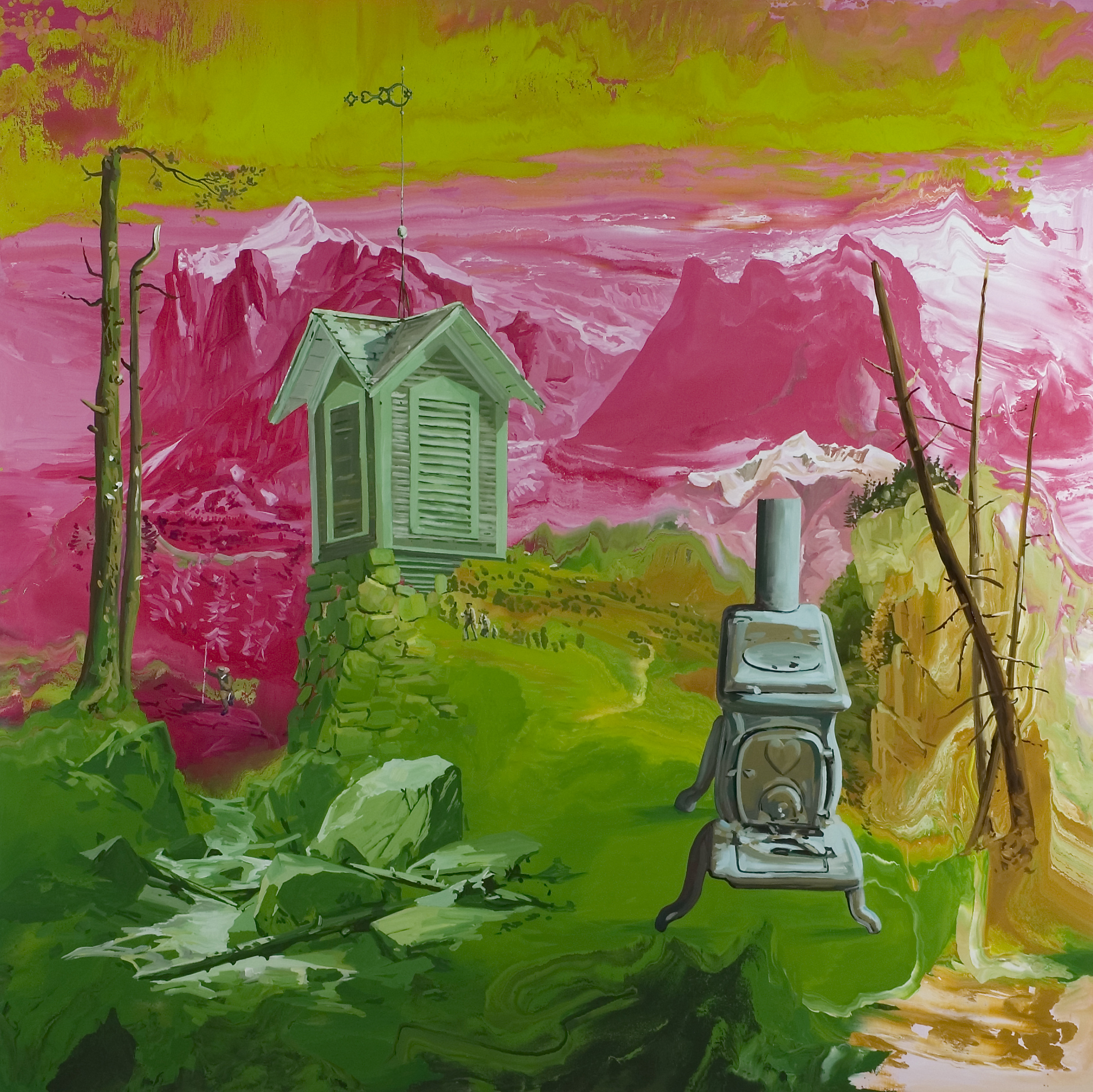 2005 winner – Dale Frank for his work Three Lies: Good things come in small packages; Nothing is interesting if you are not interested; One man’s meat is another man’s poison. They will show you everything they have – their sexy bodies. When the student is ready, the master will appear. Laughter is the closest distance between two people while Happiness is not a state of mind, but a manner of travelling. Tarampa Hotel, Tarampa Road, 2004.

Dale Frank was selected out of 41 short-listed artists from around Australia and received a $50,000 cash acquisitive prize.
Judge Rachel Kent, senior curator at the Museum of Contemporary Art, Sydney commented, “Dale Frank has explored representational and more abstract modes in his art over the past two decades. In this work, pools of poured coloured varnish create a rich and tactile surface. The exhibition of finalists represents a great opportunity to view works by over 40 contemporary Australian painters. It provides an insight into key themes and concerns shaping Australian painting now, and reflects the healthy state of the medium. The selection of an award recipient was a difficult process due to the high standard of exhibited works, and the sustained practices of the participating artists.”

Artwork
Dale Frank
Three Lies: Good things come in small packages;
Nothing is interesting if you are not interested;
One man’s meat is another man’s poison.
They will show you everything they have – their sexy bodies.
When the student is ready, the master will appear.
Laughter is the closest distance between two people while Happiness is not a state of mind, but a manner of travelling.
Tarampa Hotel, Tarampa Road, 2004 2004-05
Acrylic, varnish on linen canvas
Courtesy of the artist and Anna Schwartz Gallery, Melbourne 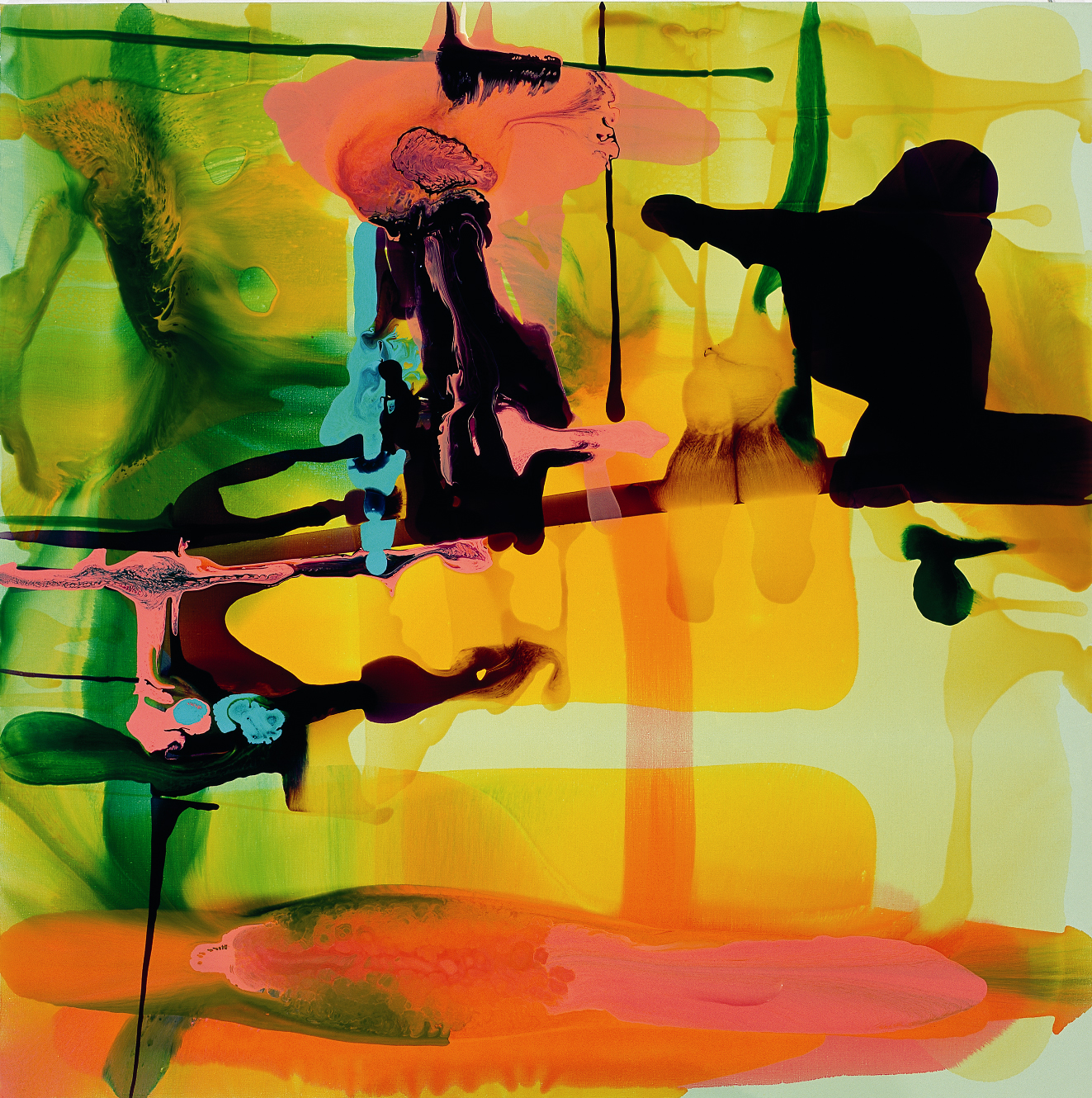 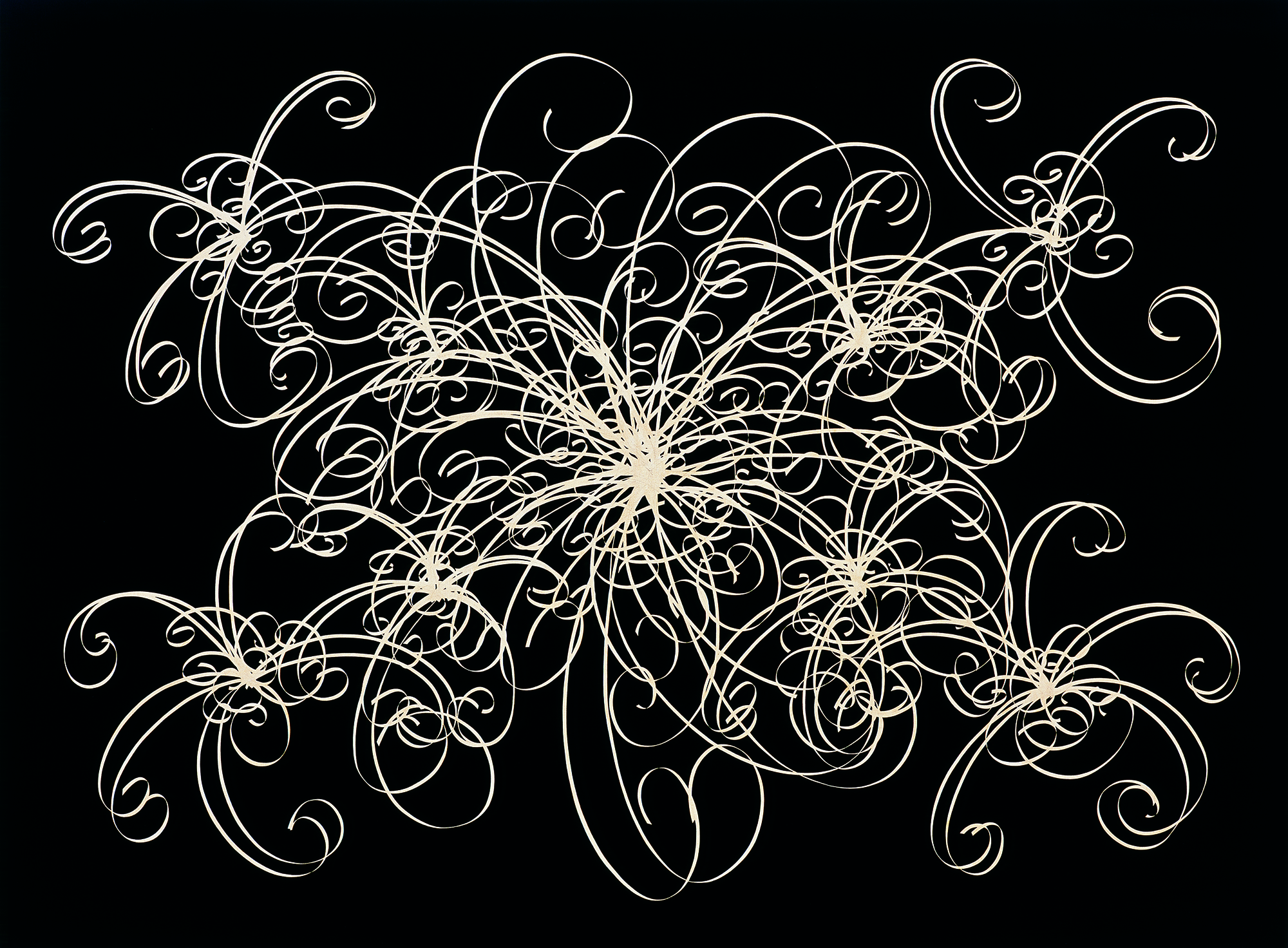