The Paul Guest Prize is an award and exhibition held every two years that highlights contemporary drawing practice in Australia. The Prize was initiated by former Family Court Judge and Olympic rower, The Honourable Paul Guest OAM QC and encourages artists from across Australia to engage with the important medium of drawing in contemporary art practice.  The Prize is a non-acquisitive cash award of $15,000.

This year’s Prize attracted entries from across the country in an incredibly diverse array of styles and approaches.  We are delighted to announce that this year’s winner of the Paul Guest Prize is:

Richard Lewer,
2020 2020
charcoal on museum rag board
100 x 150cm
Courtesy of the artist and sullivan+strumpf, Sydney

A big thank you to everyone who entered the prize and congratulations to all the finalists.

This year’s Paul Guest Prize exhibition takes an expansive view of drawing, with embroidered textiles and text-based works on display alongside those that use the less conventional mediums of sediment or clay and digital technology. The mood is equally wide ranging: Rosslynd Piggott’s Cluster Garden/Fracture and David Sequeira’s Song Cycle tap into a quieter, melodic or poetic sensibility while James Guert’s Trajectories V: Carbon Marks is set at a higher pitch, a cerebral drawing that yet seems to vibrate with the discordant screech of the scanner used to abstract the original image. There are works of wit and irony, of levity and bravery, and many that reveal exceptional skill.

The winning drawing, Richard Lewer’s 2020, is a reflective work that speaks of our shared condition and serves both as a snapshot and a summary of the year’s redirection. At the same time, it invites us to think about what is hidden or yet to come in the aftermath of the pandemic. The masked figures are silenced, motionless and yet simmering with a palpable anxiety that is intensified by the field of thousands of lines that give the picture its dissident energy. This is a powerful drawing loaded with portent and very much of its times; part observation and large part pithy and incisive social commentary.

It has been a very tough year for the Bendigo Art Gallery arising from the situation imposed by the Covid-19 restrictions. With this said, I would firstly like to extend my sincere and over-all gratitude to the Gallery for all that it has done though such testing times in facilitating this Drawing Prize. In particular I extend to the Director, Jessica Bridgfoot, and the Curator, Emma Busowsky Cox, my appreciation for their continued support and vision despite the difficulties brought about by the Pandemic.

The task that confronted Lesley Harding, the Judge of this year’s prize, was indeed a daunting one, both in the selection of the finalists and the overall winner. My respect for her professional excellence and expertise in selecting the finalists and the winner of the Drawing Prize is without limit. In my view, we were very fortunate indeed in having her undertake such an onerous burden in such testing times.

I extend to the winner, Richard Lewer, my heartiest congratulations. I am personally aware of his outstanding reputation and, if I may be bold enough to say, his drawing is remarkable, topical and pre-eminent. I have had the undoubted advantage of personally viewing the exhibition at the Gallery and can say with absolute candor that its selection has emerged from a prestigious and stellar field of finalists. I extend to Richard my heartiest congratulations and wish him all the best for the future.

To the Finalists, and all entrants, I look forward to your continued support in 2022.

Finally, and with unfeigned respect, I thank the City of Greater Bendigo and the citizens who, as I have said in the past, “are the heart-beat” of this prestigious Gallery. 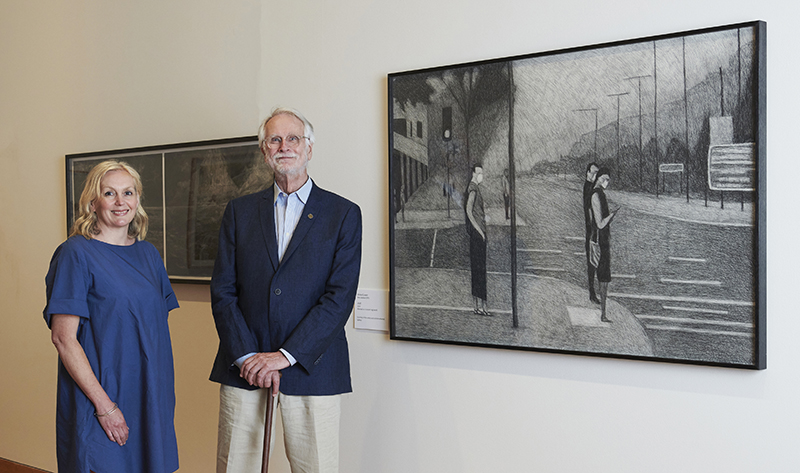 Lesley Harding, Artistic Director, Heide Museum of Modern Art and the Honourable Paul Guest OAM QC in front of the 2020 recipient of the Paul Guest Prize

Drawing is the foundation of my art practice, I appreciate that it is immediate, unpretentious and uncomplicated. From a personal point of view, drawing plays a fundamental role in my wellbeing, it is where I go to escape when I need to deal with my demons, it is the best way I know to become healthy.

2020 has been a year none of us will forget. This drawing was made as a response to the Black Summer bushfires. There were so many horrific images in the media depicting the personal, community and environmental losses you couldn’t help but be impacted by the enormity even safely far away in the city. I felt the need to visit some of these communities in East Gippsland, Victoria in the aftermath of the fires to grasp the sobering reality of confronting disaster and loss. This drawing depicts people in an urban setting wearing face masks, cities beset by smoke pollution and ash, soon to be plagued by the outbreak of COVID-19. 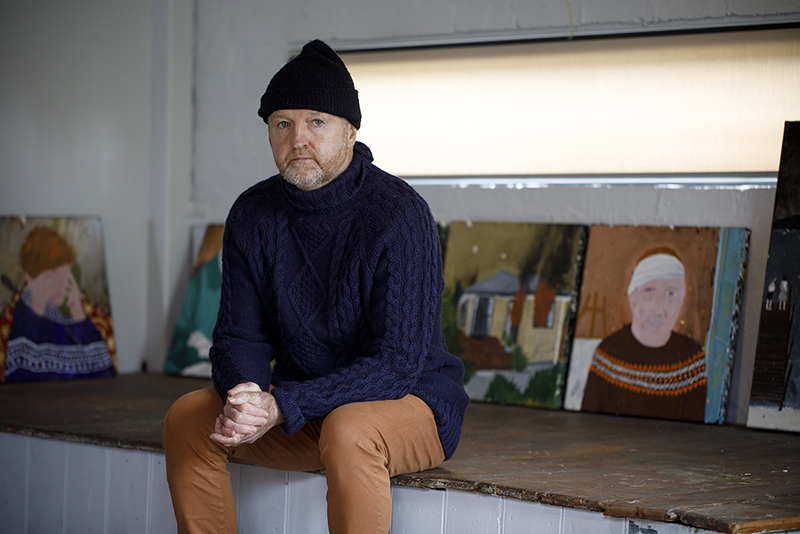 Richard Lewer in his studio

A drawing can be traditionally associated with particular materials, such as pencil, ink and charcoal, and paper. However, we also accept that artists draw on canvas, on ceramics, on walls, on computer screens and so on.  Drawing can be a way of exploring new ideas – as a development tool or used as a process towards completing a finished work. It can of course be a finished work in itself.
The use of line is commonly understood as a characteristic of drawing, however works that do not express a distinctive line, perhaps an abstraction that encompasses solid blocks of colour only, can also be understood as a drawing. Taking this definition even further – this ‘use of a line’ – a drawing could also be three dimensional and encroach into our physical space. It could incorporate or consist of text and language.
We often notice evidence of the artist’s hand in a drawing – a gesture for example, in which we can clearly see has been hand-drawn, however artists these days are also making use of digital technology to create drawing works. A drawing may be highly rendered and representational, or purely abstract.  A drawing can combine many of these elements together.
So, it is in this spirit that as an institution administering the Paul Guest Prize for contemporary drawing, we do not prescribe a definition of drawing. We believe it is up to artists to interpret that definition, to explore and push the limits of their practices and established concepts.

View the finalists in the Paul Guest Prize with Emma Busowsky Cox.

This year we have launched the People's Choice Award so that visitors can choose their favourite from the 42 finalists. People can cast their vote by visiting the voting website. Voting closes 5pm on 6 February and the winner will be announced on 7 February 2021.