As part of an extraordinary recent gift of the Honourable Paul Guest OAM QC, Bendigo Art Gallery has acquired a major work by Niuean-born New Zealand Aotearoa poet, painter and writer, John Puhiatau Pule. You Promised Me You Would Never Perish on Earth 2007 is the first work by Pule, who is one of the Asia Pacific region’s most acclaimed artists, to enter the Gallery’s collection.

The work is one of a series which the artist refers to as his ‘cloud paintings’. Against a vast white ground, Pule offers a terraced skyscape of beauty, drama and complexity. Blood-red cloud ‘islands’ are interconnected by hanging tendrils of Ti-mata-alea, a sacred native plant associated with Niuean creation mythology and fertility. Introduced peonies, finely rendered in ink, blossom up and down the hanging vines, a reference to the migration and exchange that has characterised human history in the Pacific islands. Throughout the work, groups of tiny figures are engaged in a range of endeavours, encountering fantastic mythical beasts, attending their dead, their icons or to a ritual. These complex, interrelated activities and motifs form a constellation of both real and supernatural systemic forces, and a revelation of both universal and personal themes.

Reference is also made to the hiapo, an art form of decorated barkcloth or tapa that flourished in Niue in the nineteenth century. The boldly drawn or painted geometric designs of the hiapo commonly incorporate grids, spirals and other repeated forms, as well as finely rendered motifs from nature and aspects of Niuean cultural life.i  In a sense, the significance of the hiapo within Pule’s work could be understood as both recurring motif and as a conceptual touchstone for his overall approach to his cloud paintings, which similarly incorporate such cultural references and designs within their structure. Pule’s deep personal and intellectual interest in the hiapo led him to co-author the study Hiapo: Past and present in Niuean barkcloth, alongside Nicholas Thomas, in 2005.ii

Growing up in a statehouse suburb of South Auckland in the 1960s and 70s and living with a large extended family, Pule’s first encounter with poetry at the age of 17 was palpable and formative and precipitated an enduring passion for the written word.iv  As a young adult, he found refuge from the difficulties of his youth in writing. In this, as in painting, he is self-taught. Pule’s acclaimed first novel, The Shark that Ate the Sun (Ko E Mago Ne Kai E La), expresses his experience as a Niuean living in New Zealand, where, as an associated state of that country, the majority of Niueans reside. Of the duality of living away from ancestral lands, he said,

Niue is a tiny island nation in the South Pacific Ocean, 2,400 kilometres northeast of New Zealand. Its population is just over 1,600 people. The island itself is comprised of a raised coral atoll – one of the world’s largest – and its unusual geography features spectacular cave systems along a terraced limestone coast. The vast night skies of Niue – unencumbered by light pollution from any nearby city – are as culturally and environmentally significant as the land and marine worlds below, and have recently been protected as an International Dark Sky Sanctuary.vi

Niue’s cultural and mythical traditions reflect the importance of nature just as its modern history has been shaped by migration, missionary and colonial activity and subsequent cultural exchange and impact. The precious tangible and intangible cultural heritage of the island and its environs are inseparably linked. It is a lineage, bright and alive, complex and adaptive, that is brought to bear in the work of John Pule, where a deep humanism meets the marvellous in an immense and changeable ecosystem of land, sky, water and spirit.

John Pule
b. 1962 Niue
You Promised Me You Would Never Perish On Earth
2007
oil, ink and enamel on canvas
200 x 200 cm
Gift of the Hon Paul Guest OAM QC under the Cultural Gifts Program 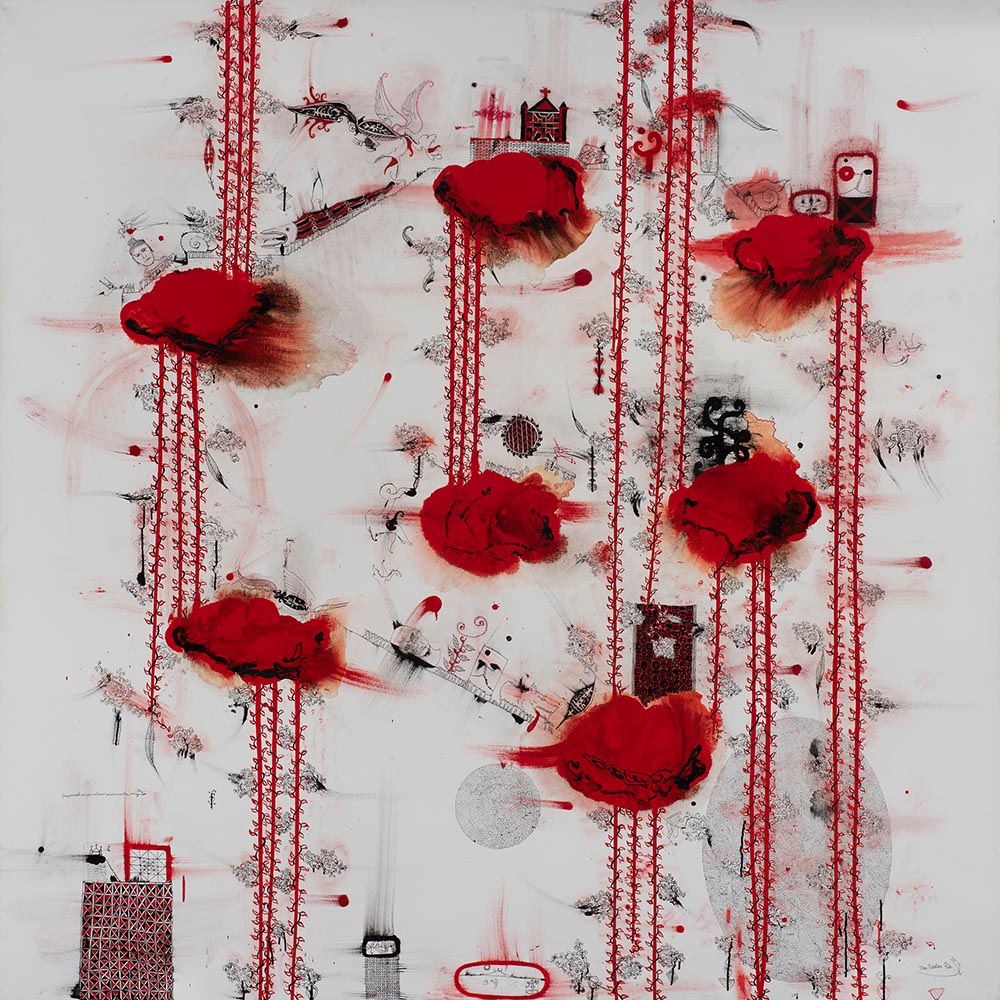