When the first Bendigo Easter Fair was held in 1871 there were many who believed it was a success because it was a novelty, and that in time, enthusiasm for its continuation would expire. These gloomy forebodings were clearly unfounded with 2020 boasting what would have been the 150th fair. While the Bendigo Easter Fair will not run this year due to public health concerns, it’s enduring success, as a platform for public connection, entertainment and collective fundraising has seen the annual event run continuously through wars, drought, times of social change and the occasional rainy Easter. Its longevity is testament to the dedicated (primarily volunteer) contribution of the local community to continuing collective traditions as well as celebrating and supporting their community.

In the years prior to the inauguration of the Bendigo Easter Fair, several friendly societies held an annual New Year’s picnic in aid of the local hospital and Benevolent Asylum (later known as the Bendigo Home and Hospital for the Aged) and in 1869 and 1870, the then proprietors of the Shamrock Hotel held an Easter sports carnival. It is said that the kernel of the idea for the Bendigo Easter Fair was sparked by a conversation between the two with the latter offering £10 for the former to ‘…hold some sports at Easter in aid of the charities – say something of a Donnybrook Fair arrangement...’ *

The combination of entertainment and fundraising proved a successful recipe. Initially revenue was raised primarily from gate takings, entry to amusements and augmented by fundraising initiatives such as the Ladies Charity Bazaar in which local donations of everything from animals to fresh produce, trinkets and toys were sold. Through the decades an array of other creative fundraising initiatives were also introduced including spinning wheels, lucky envelopes, raffles and art and craft shows.

The Popular Girl competition was instigated in 1930 along with what is now known as the Bendigo Easter Fair Street Carnival. A fundraising committee from each of the principle sections of the trading centres of the city (Pall Mall, Hargreaves, Mitchell and View street) would nominate one girl as their representative with the ‘Popular Girl’ crowned according to how much money she and her supporting committee raised for charity. A variety of fundraising activities were held from dances to music recitals, dinners, picnics and in the case of Mitchell Street in 1965, a Popular Baby contest. Spinning wheels, lucky envelopes and raffles were also associated with the competition with many local business donating valuable items, even cars, to the cause.

There was much enthusiasm for and honour in being a Popular Girl namely for the charitable contribution each could make to their community. The founding formula remained the same until 1969 when the View St committee was taken over by a committee representing Eaglehawk. Apart from that and one year when the Pall Mall representative was known as Miss Marong Village, the street committees remained in place until 1984 when groups such as Sandhurst Apex, Bendigo Chinese Association, Bendigo Apex and Lansell Y’s Mens Club started to sponsor contestants. Toward the end of the 1980s, however, social attitudes were changing and the notion of a ‘Popular Girl’ fell out of fashion. From 1988 to 1995 the competition was renamed The Easter Fair Charity Princess.

When operational control of the Bendigo Easter Fair was handed from the volunteer run Bendigo Easter Fair Society to the City of Greater Bendigo in 2003, the decision was taken to end the charitable nature of the fair to pursue a Tourism focus. However, many longstanding traditions cemented over 150 fairs still remain. In particular, the fair continues to provide a platform to share and celebrate unique cultural practices with the broader community. The Chinese dragons in the annual Gala Parade have become the most prominent symbol of this unique multi-generational sharing of cultures.

The Chinese community of Bendigo has been associated with the Bendigo Easter Fair since its beginning, formalising their annual participation in 1879, providing theatrically dressed characters, musicians and dancers for the Easter Monday procession (now the Gala Parade) and entertaining audiences with Chinese Opera performances. From 1892, a dragon became the focus and was promptly an annual highlight.

Equally motivated by charity, community connection and keeping ancient cultural traditions alive, the Chinese community were also keenly attuned to the diplomatic benefits of their significant contribution to the Bendigo Easter Fair. Through the fair, a camaraderie and partnership between Chinese and European communities was fostered and endured despite a pervading public sentiment fuelled by policies of the White Australia era (1901- 1972) that aimed to prevent people of non-European ethnic origin from immigrating to Australia. Admiration for the spectacle of the procession, the immense energy and dedication contributed by the Chinese community as well as support from the broader community has helped to foster a spirit of cooperation and ensure the traditional regalia and associated celestial beings have been paraded (almost) every Easter. Now synonymous with the event, for many, the Chinese dragons have become an icon of community pride and civic identity. 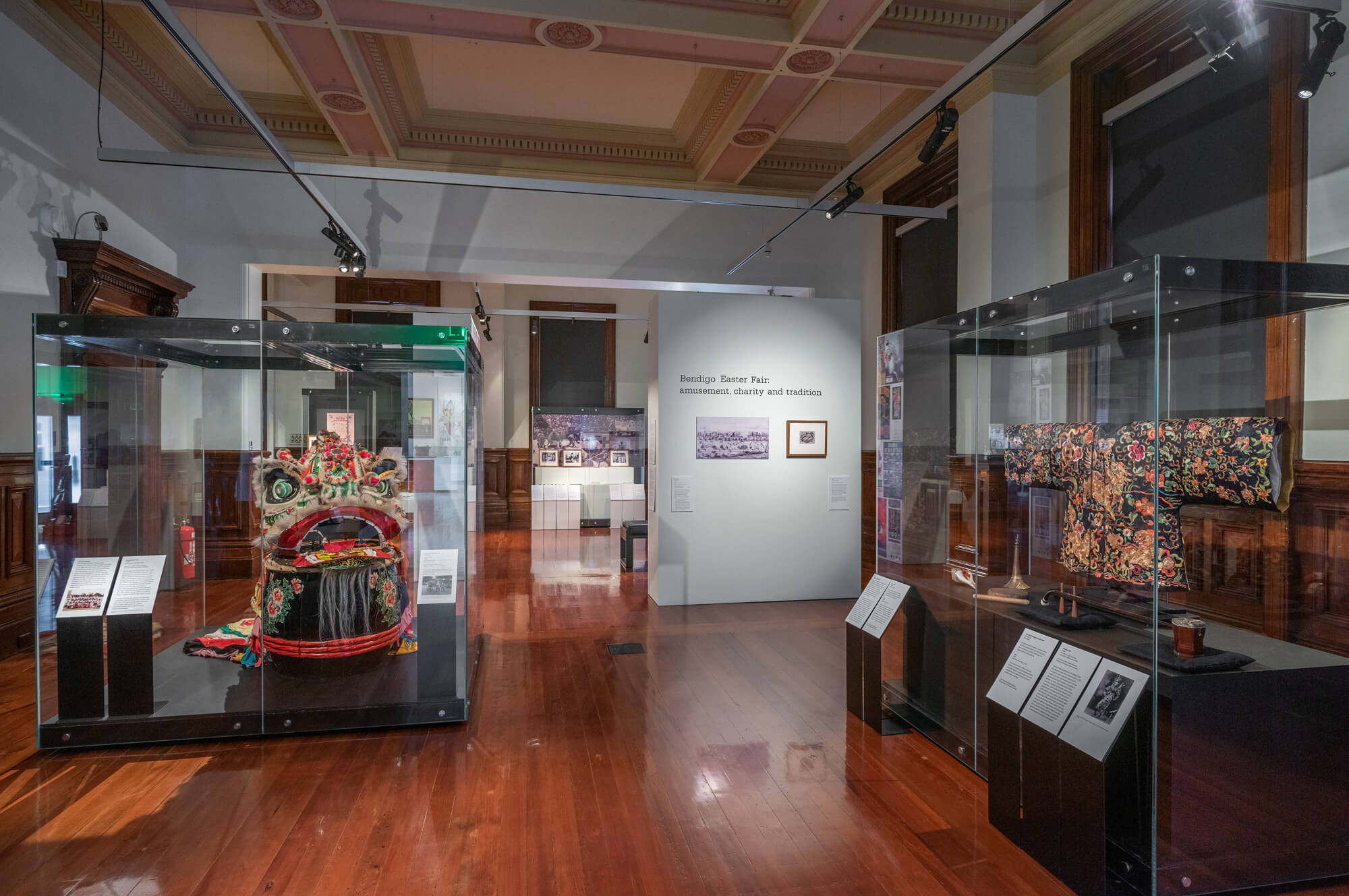 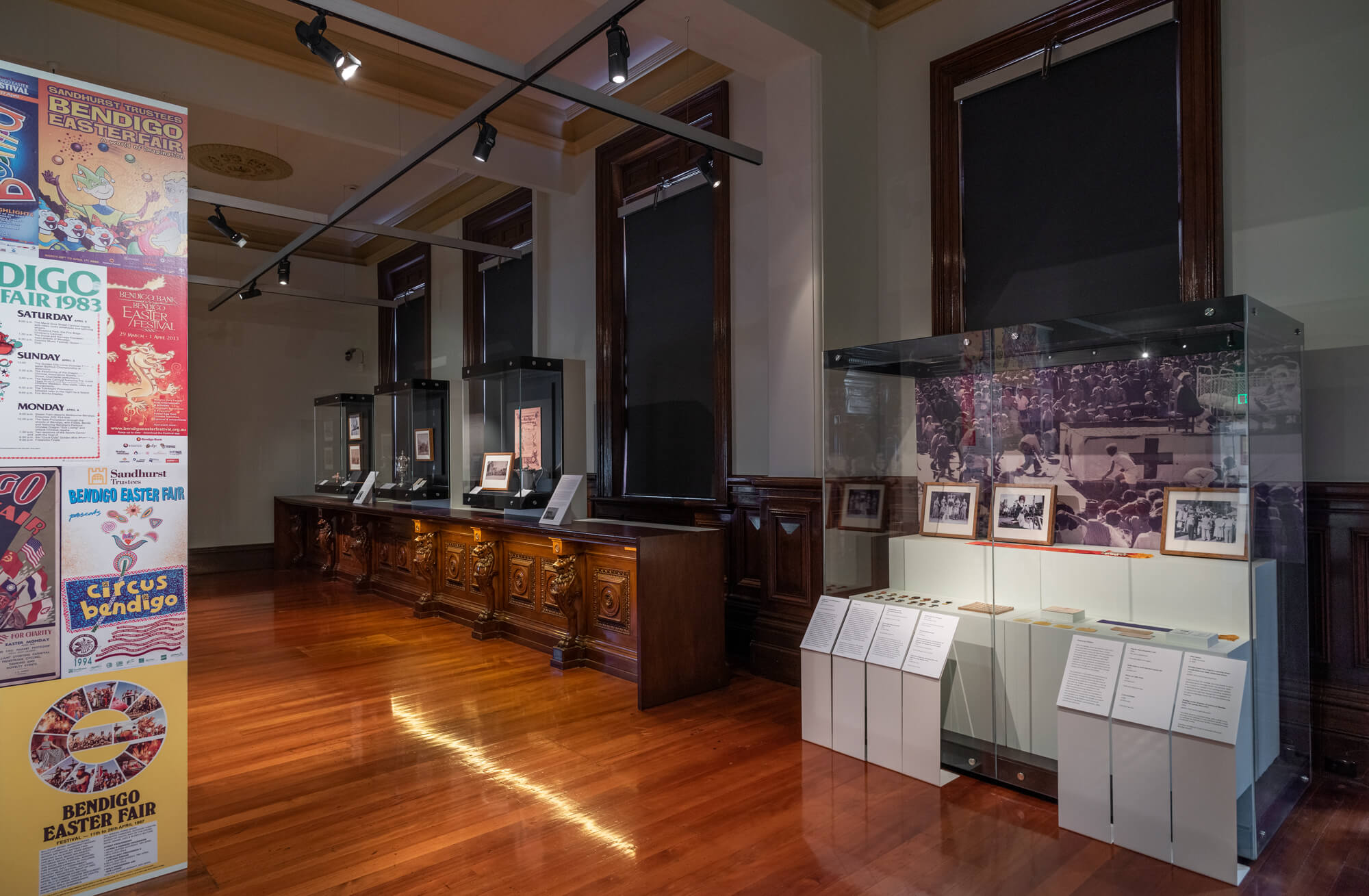 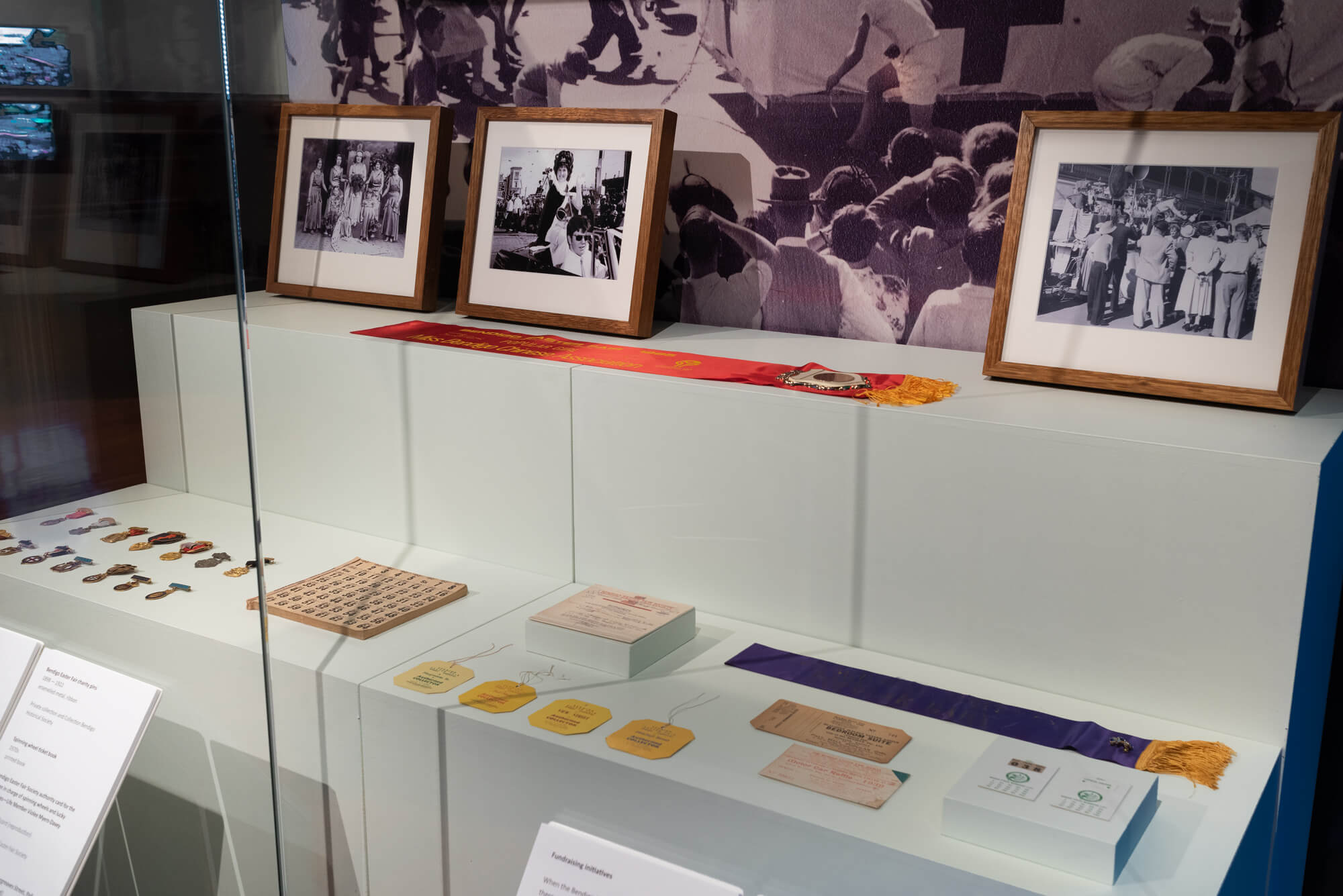 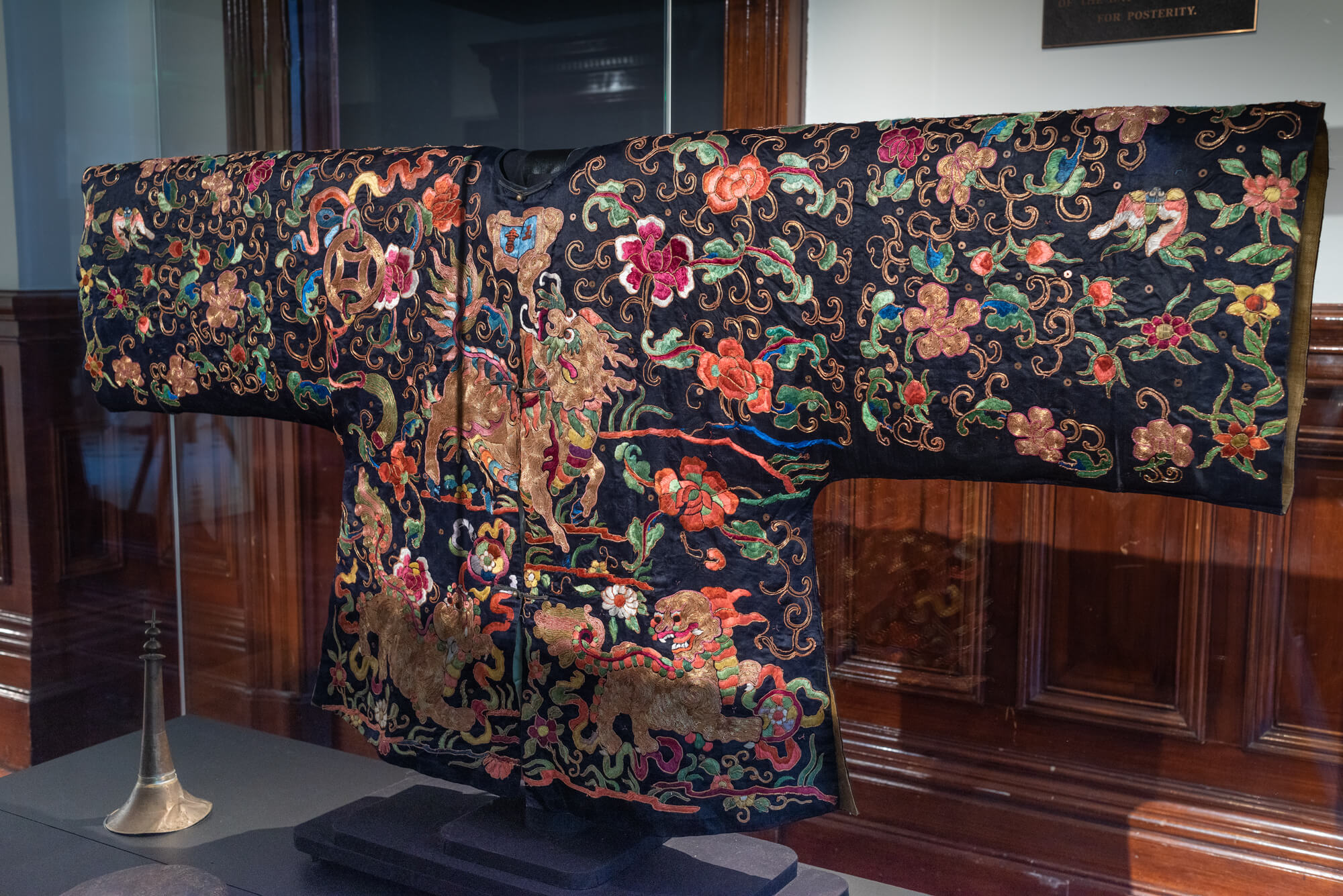 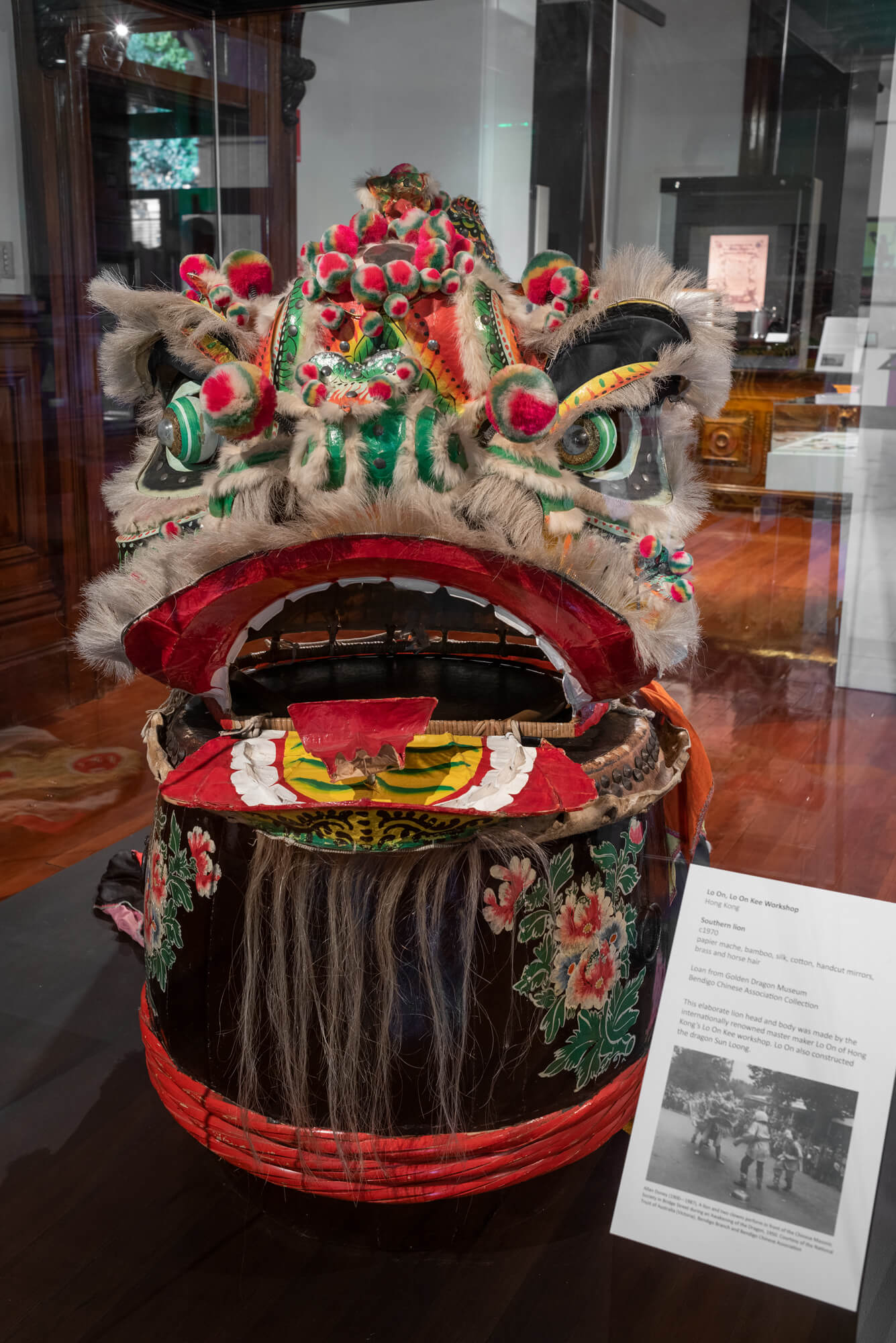 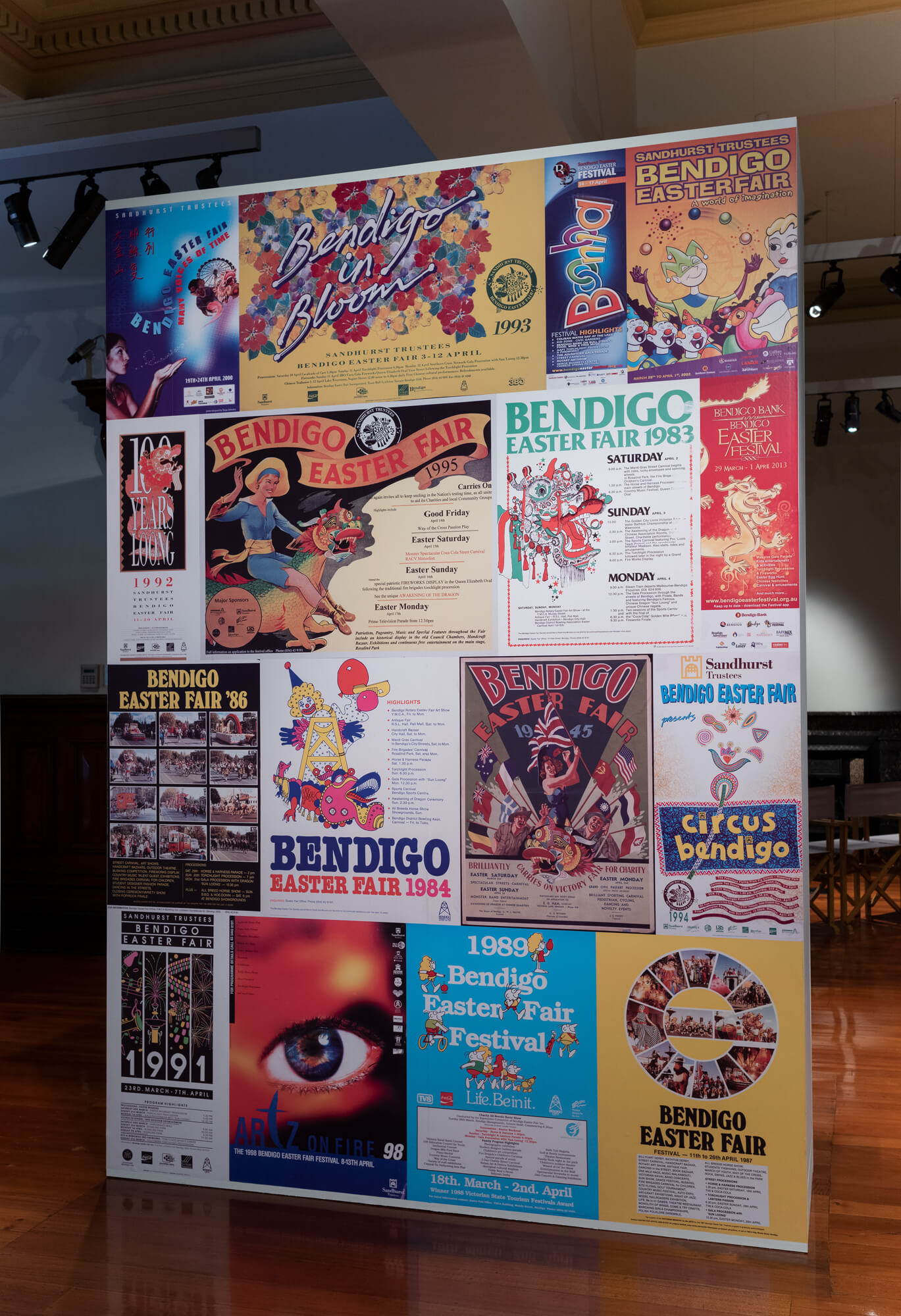