Created by the British academic painter Thomas Sheard (1866–1921), The Arab Blacksmith is a beguiling and finely painted work that remains a favourite of visitors to Bendigo Art Gallery, and as an overt example of Orientalism in art, warrants further examination with a contemporary lens.

It was purchased by the Gallery in 1903 in circumstances almost as intriguing as its subject matter. The work had been selected for inclusion in the Australian Federal International Exhibition in Melbourne in 1902, however was evidently not exhibited, thus presenting an opportunity to be acquired by Bendigo Art Gallery following the receipt of a strongly worded missive to Gallery President RHS Abbott, decrying the ‘colossal failure & mismanagement’ of the exhibition.i

Sheard was born in Oxford in 1866. He trained in Paris under Gustave Courtois and Jules Joseph Lefebvre, the latter perhaps best known locally for his painting Chloé of 1875 which hangs in Melbourne’s Young & Jackson Hotel, and its sister work, The grasshopper (La Cigale), held in the collection of the National Gallery of Victoria. Upon his return to London, Sheard exhibited regularly at the Royal Academy, and in 1897, was made Professor of Art at Queen’s College, London.

Sheard and his contemporaries had a fascination with North Africa and Egypt, and in the late 1800s and early 1900s, he and many other British and French artists undertook expeditions into North Africa, which had territories controlled by France. French North Africa thus offered a state sanctioned segue into this region, geographically accessible to Europe yet home to a climate and cultures of great contrast to the colonising homelands.

In art history and cultural studies, the term Orientalism refers to the Western imagination of ‘the Orient’ or ‘the East’, a reductive generalisation of the diverse countries and cultures of Asia and North Africa onto which Western fantasy and desire can be projected. Most famously associated with artists and writers of 19th century Britain and France in the wake of colonial expansion, Orientalism in art dates back to earlier encounters between Western and Central Europe and its legacy is still ubiquitous today. Idealized or exoticized genre scenes, portraits and figurative works that highlighted and exaggerated ‘difference’ from a European status quo (and that were often culturally inaccurate, fictionalised, and dehumanising) were characteristic, and saw Orientalism regarded as a distinct genre—indeed, a movement—in 19th century European academies and societies of art.

Palestinian American author and academic Edward W. Said’s 1978 book Orientalism spearheaded modern critical thought about this tradition and its political agenda, more recently described by Ian Buruma and Avishai Margalit as a ‘denigrating and dangerous mirage of "the East" in the Western colonial mind’.ii  Certainly the idea of Western painting being a ‘window upon the world’—first explored in 14th century Italy as artists practised techniques to achieve an illusion of realism in their works—proves problematic in this sense.

With this complex framework in mind, we see in The Arab Blacksmith a subject inspired by the artist’s observations in large market towns of semi-nomadic Arabic-speaking traders—perhaps Bedouin—although the accuracy of the depiction and the nuances of their identity are not clear. The work is likely set near a southern Algerian ‘oasis’ town, perhaps Ghardaïa, where Sheard visited in the mid-1890s and depicted in his work The Market Place, Ghardaïa, now held in the collection of Cartwright Hall Art Gallery, Bradford, England.

The dazzling light of the desert is arguably the predominant feature of The Arab Blacksmith. The depiction of light in painting has been a preoccupation of Western artists since the Renaissance, and Sheard’s painting comes almost three decades after the first exhibition of the French Impressionists, who painted from direct observation and strived to depict pure light in their works. Sheard’s work on the other hand, with its imposing size of over two metres in width, would of course have been completed in a studio.

A closer look at The Arab Blacksmith reveals an almost extreme use of purple; the smoke of the fire, the hazy folds of fabric and the shimmering sand in the distance are all liberally endowed with a purple glow. Historically and symbolically associated with aristocracy and wealth, purple has a long association with decadence; a choice that seems at odds with Sheard’s subject of the customs of a nomadic tribal lifestyle.iii  As a pigment in oil paint, purple wasn’t widely available until the mid-1800s. As such, Sheard would most likely have used the relatively new (and expensive) colour known as Manganese Violet, a colour favoured by the French Impressionists to convey light and romance. Sheard’s use of purple could have been a device to promote the ‘exotic’ nature of the scene, or perhaps he heeded Claude Monet’s sentiments on the colour, who reportedly said, “I have finally discovered the true colour of the atmosphere. It’s violet. Fresh air is violet.” iv

Contemporary Australian artist Juan Ford reimagined The Arab Blacksmith for Bendigo Art Gallery’s 2018 exhibition New Histories, with a painting called Inappropriator. Describing his work as an ‘uncomfortable homage’ to Sheard’s and acknowledging the trepidation he felt in undertaking the assignment to respond to the work, Ford’s approach was to assemble an absurd collection of layers of cultural appropriation into his painting, sending up reductive colonialist and Orientalist ideals.v

Interpreting The Arab Blacksmith and works like it highlights the importance of considering the context in which an artwork was created: what its social, cultural and political purpose may have been as well as its imagined audiences, both historically, and today. 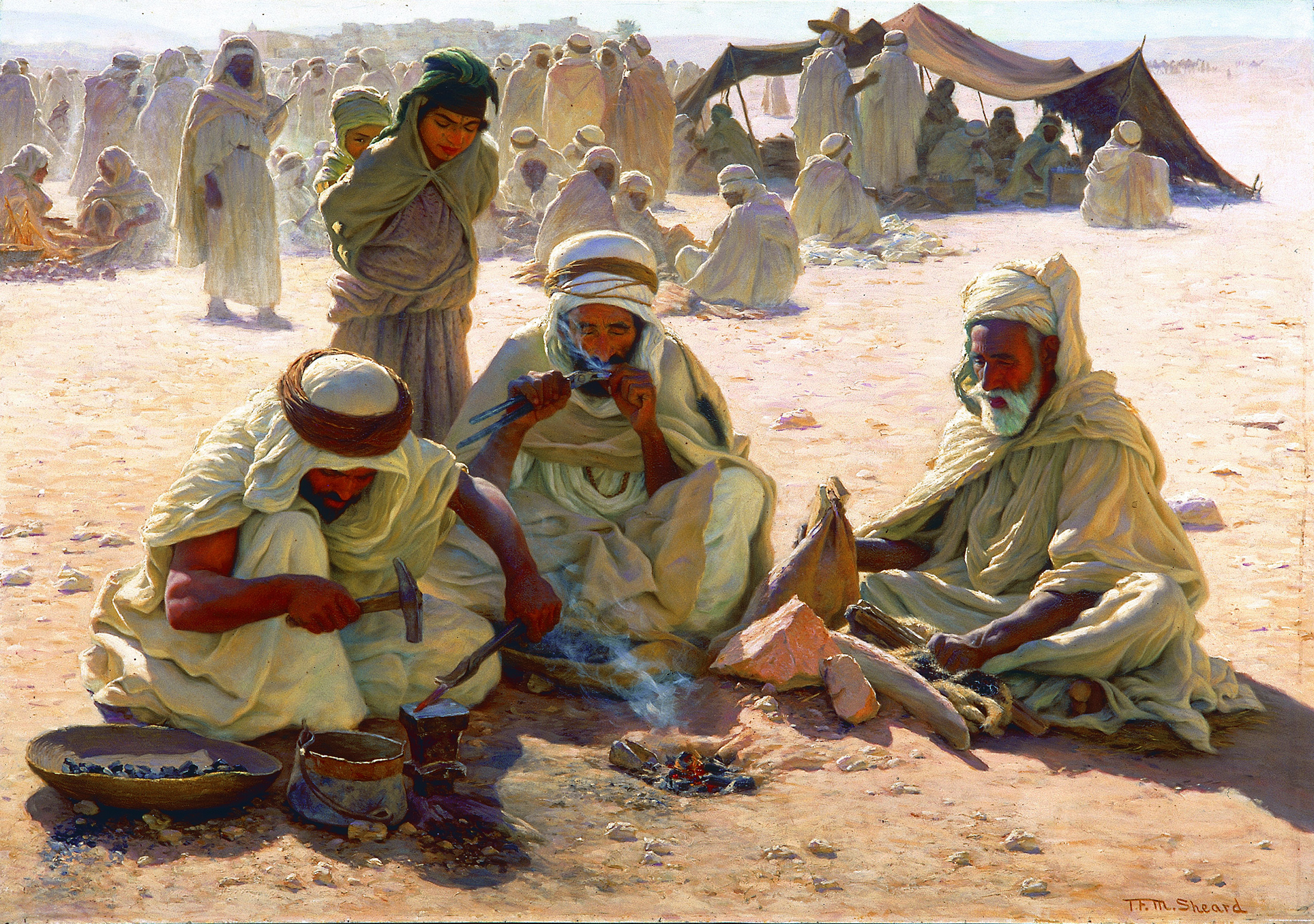 ii  Ian Buruma and Avishai Margalit, Occidentalism: The West in the Eyes of Its Enemies, Penguin Publishing Group, 2004.

iii  Muhammad Suwaed’s Historical Dictionary of the Bedouins, published by Rowman & Littlefield in 2015 provides over 300 cross-referenced entries on important personalities, politics, economy, foreign relations, religion, and culture of the Bedouins.