Currently on display in Drury Court after extensive conservation resides the highly theatrical and dramatic painting by , Nicholas Habbe, Britannia Rules the Waves. The 1876 allegorical genre painting draws on the artist’s experience as a theatre designer and incorporates a cast of sea nymphs, nereids and tritons surrounding a chariot as it forges its way across a churning sea. A winged baby riding a dolphin and an anxious-looking whale contribute to the scene. Born in Denmark in 1827, Nicholas Habbe studied painting at the Copenhagen Academy, where his talents earned him an award for painting when he was only 19 years old. In 1860 he travelled to Italy to undertake further studies while continuing to exhibit his works at the Academy. Wishing to reunite with his brother, Alexander, he emigrated to Australia in 1874/75, leaving behind Europe forever.

Alexander Habbe had tried unsuccessfully to capitalise on Australia’s gold rush, establishing himself in regional Victoria. Once he had given up hope of striking it rich, he turned his attention to local theatre productions, where he painted backdrops for performances in Ballarat and Bendigo. Alexander also worked with larger theatre companies in Sydney before returning to Melbourne for the remainder of his days. His work was recognised for incorporating strong visual representations of British patriotism and was often paired with music that emphasised these themes, such as ‘God Save the Queen’. Below is an excerpt that describes one of the performances:

‘The finale consisted of another splendid tableau, in which Madame Bishop, as Britannia; descended from the clouds, trident in hand and shield by her side. Surrounded by the group of emblematical characters as before, she stepped from her pedestal, advanced to the front, and sang the British national anthem, "God save the Queen;" the whole house rising and standing during the delivery of that noble music, which seems ever to rise and swell with all the pride and majesty of the people of whose loyal independence it has so long been the medium of expression.” (Star (Ballarat, Vic. : 1855 - 1864), Tuesday 21 October 1856, page 2)

It is highly likely that after joining his brother in Victoria, sometime between 1874-75, Nicholas witnessed the productions in which his brother’s backdrops were involved and began to draw inspiration from the strong patriotic themes leading the artist to create allegorical paintings such as Britannia.

What is Allegorical Art?

Allegory in art can be described as looking at a picture that uses recognisable subject matter to symbolise deeper meanings or messages about more complex ideas such as spirituality, life, love, death, justice and tradition.

For example, you may be looking at a beautiful landscape of a deer eating a peach beneath a magnolia tree, but the artist was intending to use the image of a deer to represent longevity, the peach to symbolise immortality and the magnolia tree to represent nobility, beauty and gentleness. A perfect gift to paint for a Princess you may have been trying to impress!

When you start to unpack the potential allegorical meaning of Britannia Rules the Waves it becomes an interesting history lesson for the modern viewer. Let’s start by looking at the main female figure, otherwise known as Britannia.

Britannia was the original name ascribed to the area of land now known as Great Britain during the Roman conquest and occupation (43 AD - 410 AD).The Romans created the identity of Britannia and visually represented her as a female goddess (allegory!) to emphasise the fact they had defeated a God, which to the ancient Roman ruling class evoked power and prestige. Britannia, created in the Roman image, was always seen to be wearing a Centurion helmet and toga, with her right breast exposed.

When the Roman stronghold on Great Britain receded, the image of Britannia was flipped from a symbol of submission to a symbol of strength and she began appearing on coins, statues and in paintings, which were often commissioned by official British agencies and organisations.  Her image was altered to include her brandishing a trident and a shield with the British flag, seen to be a patriotic representation of the nation’s militarism and to celebrate the British Monarchy and the embodiment of power.

When Queen Victoria rose to power in 1837, the image of Britannia was further enhanced by being likened to her image and both became symbols of national pride and strength. This was also important at a time when Britain was establishing and strengthening its own national character as it advanced from a nation-state into a full blown Empire and Britannia the icon could be seen to visually represent the people of Britain and their Monarch, along with Imperial Britain’s triumphs around the globe (Matthews, R., 2000)

Who’s that bearded fellow next to Britannia?

This appears to be Neptune, the Roman counterpart of the Greek God Poseidon. They are both gods of the sea, with similar symbolism and domain. Neptune can be seen to be holding a trident (the three-pronged fork in his right hand) which some scholars have claimed may represent the three properties of water: liquidity, fecundity and drinkability.

The male figures surrounding the chariot and blowing the conches appear to be Tritons. In Greek mythology, Triton was the son of Poseidon but at some point during the Greek and Roman era, Triton(s) became a generic term for a merman (mermen) in art and literature. In English literature, Triton is portrayed as the messenger or forerunner for the god Poseidon and is usually depicted with the upper body of human and lower body and tail of a fish.

Is that a baby riding a dolphin?

At the lower centre of the painting there is a cherubic looking baby atop the back of a small dolphin. Most likely, this baby is representative of the Roman god of love, Cupid. Cupid has been linked to Neptune in a few mythological stories, and it is unclear from this painting which one specifically may be in reference or if he is just here as a reassuring presence on the journey through the high seas.

What is the artist saying?

Captain James Cook had invaded Australian shores in 1770 and the combative process of colonisation had been underway for a little over 100 years when Nicholas Habbe created this work. Britannia was likely commissioned to appeal to the nostalgia of British migrants to maintain a sense of patriotism and alliance with the ‘mother country’. In keeping with colonial ‘propaganda’ of the period, the scene is void of any sense of the true realities of the new colony - omitting First Nations people, diverse migrant communities and glazing over the painful truths of British settlement with majestic surrealism to affirm the force and vitality of the British Empire. 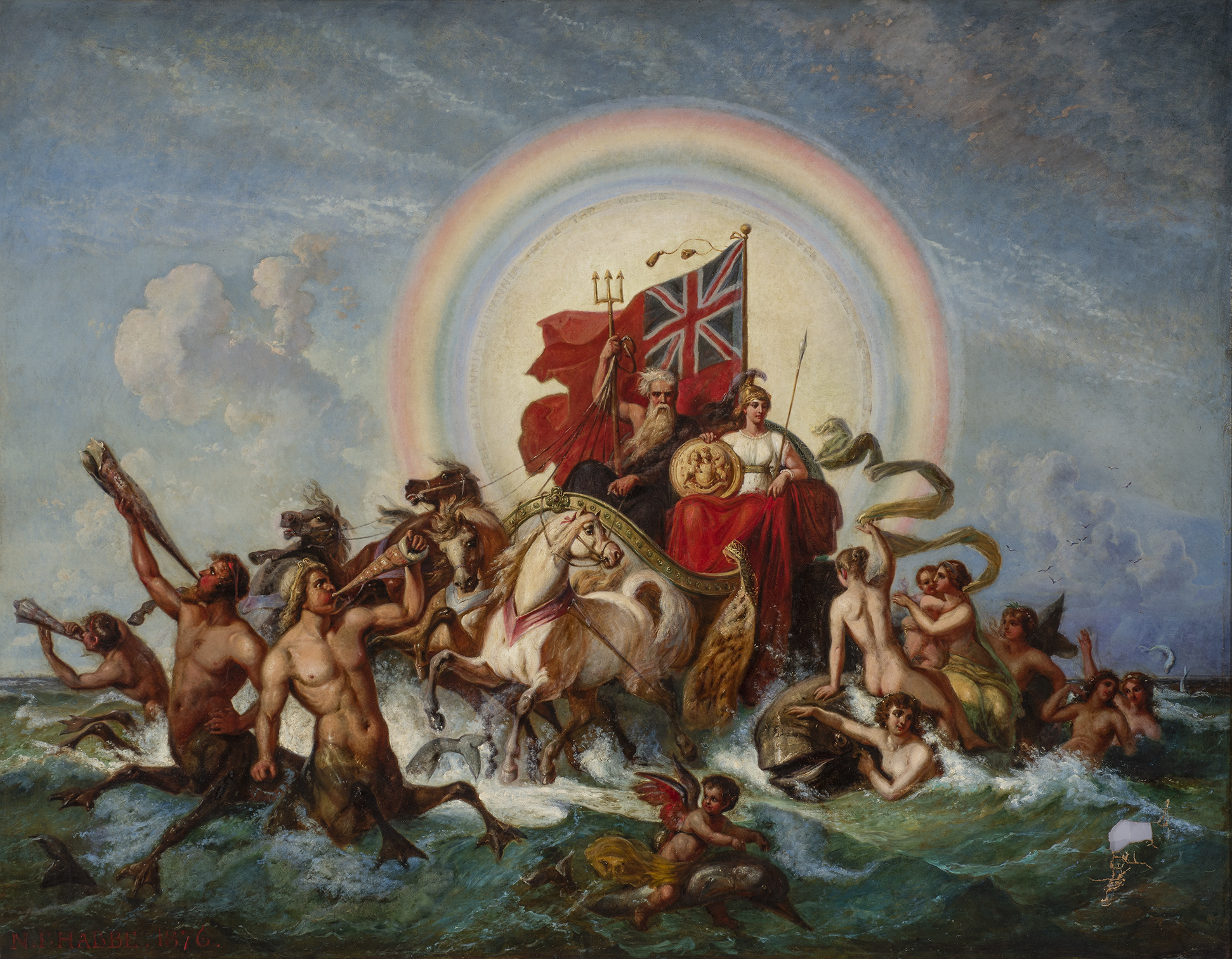