The Bendigo Art Gallery is a rich source of inspiration for curators, researchers and lovers of fashion and art.  Delving further into our decorative arts collection reveals a fascinating but forgotten object, the chatelaine, which once held an essential place within women’s lives.  Donated as part of an extensive decorative arts bequest by Jean and Arthur Newson in 1977 our chatelaine is best described as both a domestic tool and a finely crafted piece of jewellery broadly popular from the 17th Century until the early 20th Century.

Typically, a chatelaine is a miniature set of tools which hangs from chains attached to a belt with a decorative buckle or clasp. Designed as a convenient way of carrying keys, scissors, coins and household seals at a time when skirts and dresses lacked pockets, chatelaines combined beauty with functionality. Made from both precious and non-precious metals and needing to withstand constant use, chatelaines ranged from extremely simple in design to highly ornamented. 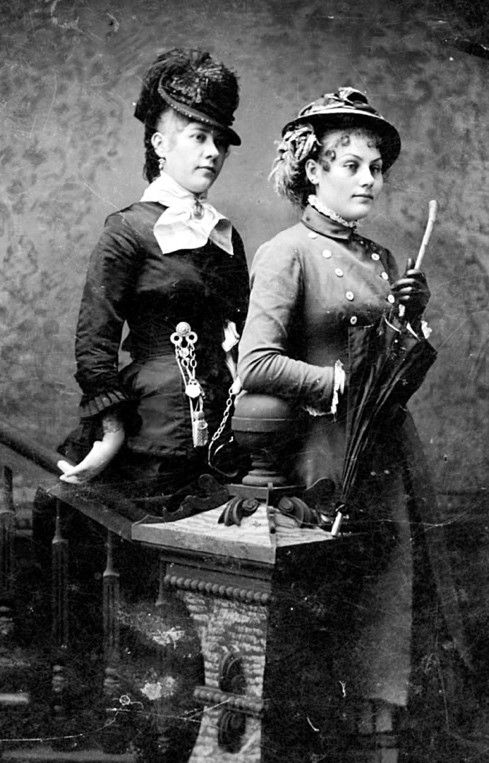 The word chatelaine is directly related to the French word chateau and is the female form of the word chatelain, a keeper of a castle. While we can trace back the tying of useful tools to our waists to Roman times for both men and women, wearing a chatelaine symbolised female power within a household.  A woman wearing a chatelaine could be easily identified as the mistress of the house whose job it was to control access to locked desks, food stores and money. Chatelaines were often individualised by the wearer to include accessories such as charms to ward off evil eye, scent bottles, or nutmeg graters (remembering this spice was so valuable in the 17th century that the English and Dutch went to war).

The chatelaine in the collection of the Bendigo Art Gallery has three accessories relating to a seamstress; a pin cushion, tape measure, and hook and two other accessories; a pencil and case for holding paper, which could be used for creating lists or recording the names of intended dance partners at a ball. We are able to ascertain important information about each part of the chatelaine by investigating the makers mark which is represented through a series of symbols stamped into the metal.  These symbols tell us not only who the maker/s were, but when and where it was made. While some of the makers marks are worn through use and difficult to decifer, we can see that the pen for example, is stamped with n/anchor/lion /LB indicating that it was made by the Leech Brothers of Birmingham in 1894. Overall our chatelaine was manufactured between 1894 and 1914 by different makers across England, but it is not known if it is a complete and original set, who it was made for, or when in arrived in Australia. 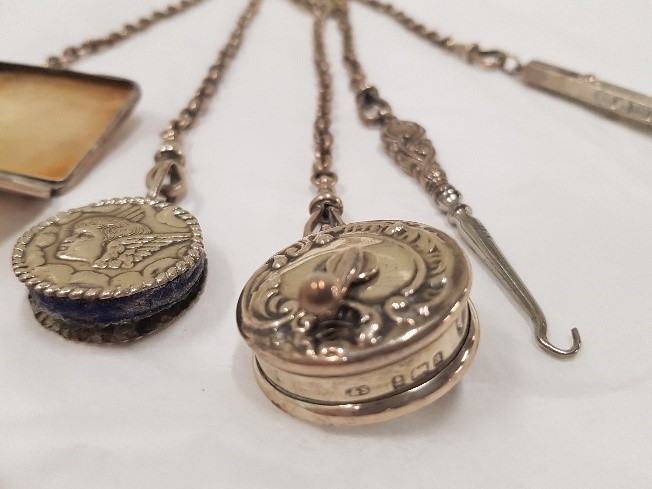 Chatelaine’s remained popular throughout Europe and Great Britain until the First World War and at the height of their fashion during the 18th Century, functionality eclipsed beauty with their design becoming more elaborate as precious stones and fine ornamental filigree elements were added to showcase the maker’s skill and highlight the wearers wealth.

Chatelaines were an essential item at a time when there was no other means of carrying accessories but as fashion changed and purses and handbags grew in popularity chatelaines gradually disappeared altogether from public use and therefor ceased being made. By todays comparison our key ring and mobile phone have taken the place of the chatelaine and we have come to rely on these just as women in the past relied on their chatelaine.