Historic water damage to the canvas had caused destruction to the paint layer. Previous retouching to the painting had also discoloured over time, resulting in a milky appearance. The retouching had been done quite roughly, which resulted in some areas of original media being obscured by overpainting. The painting was also discoloured due to the aged varnish which resulted in an overall yellowed appearance. It was time for conservation treatment!

The discoloured varnish layer was removed using an organic solvent solution which also removed the discoloured retouching without affecting the underlying original paint layer. The painting was retouched with dry pigments and a conservation grade synthetic resin, and then revarnished.

The frame was treated for several losses and underwent bronze overpaint removal and a general surface clean. 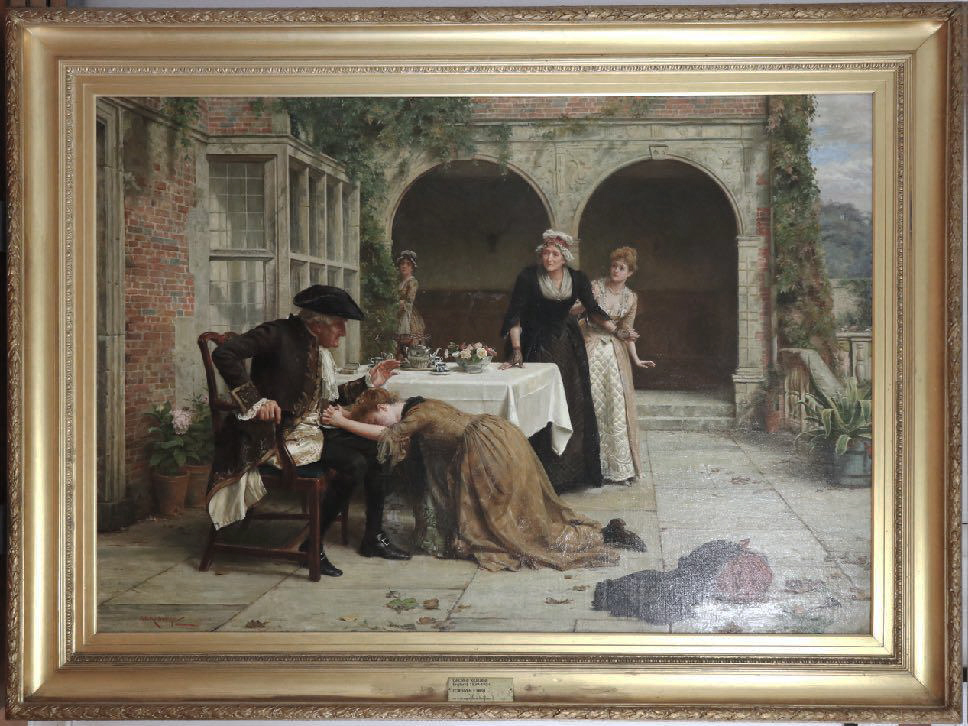 George Goodwin Kilburne Snr (1839-1924 London) commenced his artistic career by undertaking an apprenticeship to the Brother’s Dalziel, engravers and illustrators. After working with them for 5 years, he moved on to painting and began exhibiting at the Royal Academy from 1863 onwards and followed a career as a prolific genre painter and illustrator, often in watercolours.

How did this work end up in Bendigo?

The painting was a gift to the gallery from the Hon. W.I. Winter-Irving, M.L.C., 1889. William Winter Irving was an Australian grazier, magistrate and politician and a member of the Victoria Legislative Council.

The Painting, What am I looking at?

The work portrays a dramatic familial scene with a young woman throwing herself face-first into her seated father’s lap in an act demonstrative of begging for forgiveness. Her hands are clasped in a prayer-like pose and there is a small, tied bundle and coat haphazardly tossed onto the floor near her, as if It has been dropped there quite suddenly. In the background, three characters are visible an older woman (possibly the mother) who is gently restraining a younger woman (possibly the sister) with her forearm, prohibiting her from approaching the scene. Another woman is partially obscured further in the background, who could possibly be a servant covertly observing the scene.

An historic article, perhaps from the Bendigonian Newspaper about the work describes it as follows:

“Notice, after admiring the chiefest points, the effect of the sunlight glistening through and reflected on the glass window – a happy omen of sunshine to the heart- the table with tea set, the old fashioned silver tea-pot, and bowl of flowers and the silver snuff box, the painting of the penitents dress (frayed and worn at the edges) and her travel-stained shoes. Do not forget to look at the small bundle, containing her scant wardrobe, tied up in a red handkerchief; and by no means miss the glimpse of the garden beyond the parapet. Attention is called to these smaller matters because they are so often not seen by the casual observer. It matters little whether the scene is laid in England or France, for men and women with true hearts are much the same the world over. The story is a sad but not guilty one. There is no suggestion of sin in the form of the repentant girl, kneeling at her father’s knee, no trace of obtrusive finery in her well-worn, almost threadbare dress, which betokens the immodest castaway, and her strong leather shoes have an honest look about them and carry the traces of many a weary mile.

Could her face and eyes be beheld, her soul would look out as pure and unsullied as when she left the parental roof. A hasty, unconsidered, unrecognised, forbidden marriage with a handsome, vain and reckless spendthrift, a gambler, most likely libertine to boot, whose soft ways and lying tongue had lured her to an elopement – since how bitterly repented! Then his sickness and their penury, her constant womanly devotion, until his early death. The black scarf about her neck, black stockings and mantle – her slight and humble signs of mourning. Her wedding ring is absent, having been disposed of at the dictates of a stern necessity. Wilful and disobedient she had been, but not sinful, and with the cry of the “Prodigal” of the old parable ringing in her ears, she seeks and finds forgiveness.

The old man blesses her, and the shadow on that house which was thought “would be lifted never more” was dispelled like a morning mist before the rays of the genial sun. Her mother and sister in the background look on; the youthful one of the pair all eager to clasp her long absent companion to her breast, but is motioned by the old lady to restrain her pent-up feelings and permit the husband – father- and poor sorrowing, yet loving child, to enjoy undisturbed the most holy and sacred moments of their lives. Doubtless on the succeeding morning the aged man might have been seen walking the garden with head more erect, not wondering why the sunshine seemed brighter, the sky more blue and the carol of the birds more joyous than they have seemed since the dark, tempestuous night with its wild wind, laden with his curse – that curse which had fallen, not on his daughter, but with swift retribution upon him who had selfishly decoyed her from home.”